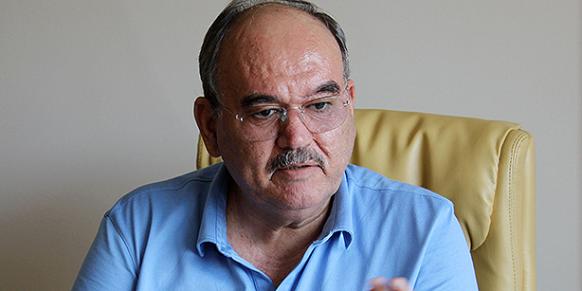 Özfatura, who has expressed support for the police officers who were placed under arrest and has strongly criticized the recent judicial and security packages, speaks aloud at a time when everybody else remains silent. He is a renowned politician who served in center-right parties and he worked pretty closely with Özal in the implementation of economic reforms. Özfatura spoke to Sunday’s Zaman about the Justice and Development Party (AKP) and the Hizmet movement.

Speaking about the terror charges against Gülen, Özfatura says: “Fethullah Gülen is a true Islamic scholar who is dedicated to the unity, solidarity and strength of the Turkish-Islamic world. Interestingly, he was treated like a terrorist for many years in the aftermath of the Sept. 12 [1980] coup as well. He has always placed emphasis on brotherhood and modesty. If no violence took place in İzmir [during the turmoil in the 1980s], it was because of him and his moderate views.”

Özfatura further explains how he met with Gülen: “I met him in 1970. I had started a job after my military service and had heard about his activities and services but I had not had the opportunity to meet him. One night, along with [former Finance Minister] Kemal Unakıtan and Abdurrahman Serdar — and Hidayet Atıcı, who was like a brother to me — I went to the Kestane Pazarı Mosque. Gülen had a very modest room there. The only valuable things there were books. We started a conversation. In the meantime, a fairly modest young man was also serving us. I thought Gülen was not there; I told my friends we should leave because Gülen might have something to take care of. But Hidayet told me that Gülen was that young man who was offering us tea. He has not changed since then.”

Based on his acquaintance with Gülen, Özfatura stresses that the scholar would not demand anything from a political administration. Referring to Gülen’s meetings with Çiller and Özal, Özfatura recalls that he did not ask any personal favor for himself or for his supporters. Özfatura further says that the only thing Gülen asked was a reference to support the Turkish schools abroad, adding that he loved Gülen like a brother. Özfatura also underlines that Gülen would never get involved in politics because he did not ask for political support from his followers even for himself, despite the brotherhood between them.

Özfatura believes that the ongoing repression is even graver than the oppressive measures during the coup periods and notes that the legal actions against Zaman and the Samanyolu Broadcasting Group (STV) were politically motivated. Noting that President Recep Tayyip Erdoğan cannot possibly finish off the Hizmet movement, Özfatura says: “Oppression cannot be sustained forever … Everybody has a plan, but Allah also has a plan … Allah will always side with the oppressed. Besides, Gülen remains decisive; millions of people are praying for him … I am full of hope; I am not pessimistic.” Arguing that the AKP is neither conservative nor religious, Özfatura further asserts that it is a party that exploits Islam and that declares everybody who does not support its policies to be enemies.

Referring to his service as a politician in the Motherland Party (ANAP) and the True Path Party (DYP), Özfatura says: “A similar process was taking place in the final years of ANAP. There were many bootlickers, but what is happening right now in the AKP is far graver than this. They are making serious remarks that I find unbelievable. One of them said even that touching Erdoğan has a divine meaning; [Interior Minister] Efkan Ala says he is even more modest than the Prophet [Muhammad]. We have never experienced anything like this. The only criterion is whether or not you are pro-government. You are asked to submit to the government. In the past, nobody was able to get a place at universities in the southeast region. Thanks to the activities of the Hizmet movement in the region, kids became integrated into society. They are now able to enroll in universities. But the [Kurdistan Workers’ Party] PKK did not like this. Shutting down the prep schools was a demand of the PKK.”

Noting that Özal, former President Süleyman Demirel and former Prime Minister Bülent Ecevit have always defended the Turkish schools abroad, Özfatura expresses his disappointment with the current administration’s negative propaganda against these schools. He says: “Erdoğan tells African leaders to shut down these schools; I cannot believe it. But I think I can understand Erdoğan. He does not want a strong civil society. The AKP opposes all religious groups and communities that are not pro-government. And there are also the demands of the terror organization. The PKK also does not want religious communities.”

Asked whether the invention of an enemy called the “parallel structure” by the government was a coincidence subsequent to the corruption scandals, Özfatura says: “This is a cover-up operation. They identified the Hizmet movement as an enemy. The Dec. 17 and 25 [2013] corruption scandal was huge. Bribery has become a major problem. Despite all efforts, they were unable to cover up this scandal. We all know these tapes. Can you imagine that [former Interior Minister] Muammer Güler’s son receives $30,000 a month from [Iranian businessman and key graft suspect] Reza Zarrab? For what? His father writes a reference letter as interior minister to prevent operations against him. They ruined everything in the judiciary. It also became evident that Reza Zarrab covered the election expenses of [former Economy Minister] Zafer Çağlayan in Mersin.” Özfatura recalls that the government has relied on different measures to ensure that the scandal is forgotten and notes that the government has sought to restore its image and prestige by spending huge amounts of money to build palaces, buy cars and aircraft. Stating that honest people should oppose injustice and unfairness, Özfatura says: “There are many people within the AKP who know Gülen well; they are responsible for not speaking out.

They should have reacted to what was being done to the Hizmet movement. The 2015 elections are very important; if they do not act reasonably and prudently, they will do harm to themselves.” Asked whether people will ever see the truth, Özfatura says: “The supporters of the AKP should make an analysis here and ask the question: Is this movement working for its own interests? Turkey is moving towards the edge of collapse very fast. There is single-man rule in Turkey. There is no law and order; one man holds the powers of the president, party chairman, prime minister and ministers. His orders are taken as divine rules. Everybody has only one duty: To support what he says.”

The lawyer of Islamic scholar Fethullah Gülen has strongly dismissed claims by a French publication that followers of Gülen are among members of an alleged jihadist formation encouraged by Turkey to fight a political offshoot of the terrorist Kurdistan Workers’ Party (PKK) in Syria as baseless slanders. “The claim in question is first of all […]