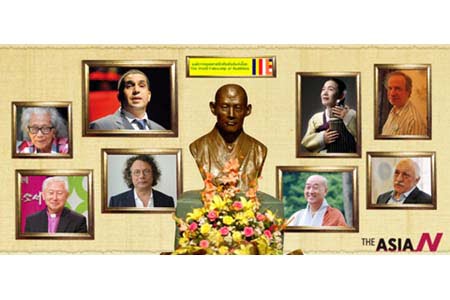 Three winners for each category and a total of nine winners have been chosen out of approximately 300 candidates throughout the world.

The winners in peace category are Fethullah Gulen, 72, Kim Sung-soo, 82, Archbishop of the Anglican Church of Korea, and the World Fellowship of Buddhists (WFB).

The Manhae Prize in practice category will go to Abderrahim El Allam, 50, a Morocco writer, Whang Il-myeon, 66, a Korean Buddhist monk, and Dagon Taryuar, 93, a Myanmar poet and novelist.

The awardees in culture category will be Ahn Sook-sun, 64, a Korean Pansori master singer, Ingo Schelze, 51, a German novelist, and Konstantin Kedrov, 70, a Greek philosopher and poet.

Among the prospective winners this year, Fethullah Gulen is the founder of the famed Hizmet movement. Gulen teaches Islamic beliefs and has stated his belief in science, interfaith dialogue and multi-party democracy. He is actively involved in the societal debate concerning the future of the Turkish state, and Islam in the modern world. He has been described in the some media as “one of the world’s most important Muslim figures.” He currently lives in Pennsylvania in the United States.

WFB is an international Buddhist organization founded in 1950 in Colombo, Sri Lanka by representatives from 27 nations. It has been working to promote strict observance and practice of the teachings of the Buddha, to secure unity, solidarity, and brotherhood amongst Buddhists and propagate the sublime doctrine of the Buddha.

WFB organizes and carries out activities in the field of social, educational, cultural and other humanitarian services. The current president of WFB Phan Wannamethee of Thailand serving since 1999, while Venerable Hsing Yun of the Republic of China serves as honorary president.

Abderrahim El Allam is one of the active columnists for The AsiaN. The writer and literary critic from Morocco has been served as President of the Union of Writers of Morocco. He published and translated many books including literary works by Hanna Mina, a Syrian novelist and Roger Garaudy, a French philosopher. He has organized a social service program called ‘Reading Train’ in which volunteers distribute books to the public for free at train stations across Morocco.

Whang Il-myeon has served as chairman of Life Sharing Practice Sociery since 2005 and contributed to the promotion of organ donation and suicide prevention.

The well-known Myanmar writer Dagon Taryar was the publisher of Taryar magazine, chairman of the Writers’ Association 950 and led many literary movements over the years. He worked in peace campaigns as acting chairman of the World Peace Congress.

Ahn Sook Sun was born to be a Pansori singer. She was born in Nam-won, a traditinal Pansori town and at the age of 10, she won several Pansori singing contests in Korea. She Joined The National Changguk Compoany Of Korea and now is the art director. She took main role in several classic operas to deserve her gifted talent and called ‘prima donna of Korean classical music’. She propagated Pansori music all over the world. After a performance in Europe, a France Journal praised her Pansori singing as ‘sound from heaven’.

A German writer Ingo Schulze studied classical philology at the University of Jena and was a dramatic arts advisor at the State Theatre in Altenburg. He made his debut by writing a collection of short stories 33 Moments of Happiness, and won a number of awards for his novels and stories, which have been translated into twenty languages.

Konstantin Kedrov is a Russian avant-garde poet, philosopher, philologist and literary critic. He graduated from Kazan University and made his post-graduate research in Moscow Literary Institute. He has studies the projection of the universe to human minds through mythology and literature and found interaction and correlations between different images and symbols in poetry and mythology. He was elected President of Russian Poetry Society was awarded the Grammy Russian Prize in literature as a poet of the year in 2003 and 2005.

Manhae Foundation, an organization commemorating poet Han Yong-un (1879–1944), also known as Reverend Manhae, hosts the annual Manhae Prize to honor people who promote peace across the world. Han is famous for his work “Love’s Silence” and his patriotic activities. Manhae is a penname for Han Yong-un, who protested against the Japanese rule. He became a Buddhist monk at Baekdam Temple in 1905 and his poems highlight themes of freedom, equality and harmony.

Major winners of the prize in previous years include the Nobel Prize laureate. The winner of 2012 Nobel Prize in Literature Mo Yan from China won the Manhae Prize in 2011. Dr. Souad Al-Sabah whose collection of poem has been published in Korea by The AsiaN received the Manhae Prize in 2012. And Iranian lawyer and former judge and human rights activist Shirin Ebadi, the former President of Korea Kim Dae-jung and the former President of South Africa Nelson Mandela are awardees of the Manhae Prize and the Nobel Peace Prize as well.

The award ceremony for this year will be held on Aug. 12 in Bekdam Temple located in Kangwon Province in South Korea, where Manhae once stayed.