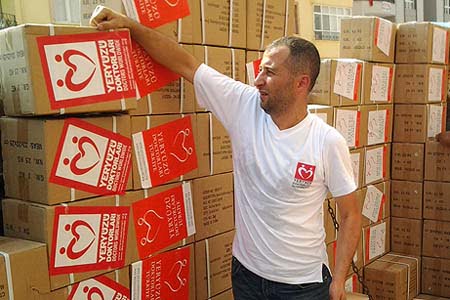 Kimse Yok Mu (Is Anybody There), a Turkish charitable association known for its international assistance work, will accelerate its aid efforts in Palestine by establishing a school and hospital there in 2013, while Doctors Worldwide steps up efforts to assist Syrian refugees taking shelter in Turkey.

Palestinian Ambassador to Turkey Nabil Marouf visited Kimse Yok Mu in Ankara on Sunday and met with the charity’s chairman, Ünal Öztürk. During their meeting Öztürk explained details of their aid campaigns and work in Palestine. Öztürk stated that they would establish a new school and hospital in Palestine as well as open a permanent branch of the organization in Jerusalem. After the meeting, Ambassador Marouf expressed his thanks to the Turkish people and Kimse Yok Mu, which has been working in Palestine since 2006. Marouf also added that Palestine is still greatly in need of aid in the areas of health and education and that they hope to receive more help from Turkey.

Meanwhile, Turkish branch of UK charity Doctors Worldwide (Yeryüzü Doktorları Derneği Türkiye), a group of volunteer doctors, continues its work with Syrian refugees. Nearly 200,000 refugees are taking shelter in camps in southern Turkey and more are still expected to arrive. Millions of people are also estimated to be short of food inside Syria. As part of the “Bread for Syria” campaign, the organization sent medicine and first aid materials at a cost of TL 500,000 to Syria in two semi-trailers on Monday. They also established an aid station and a pharmacy in the southern province of Hatay’s Yayladağı district, where a large number of Syrian refugees are living. They also have plans to provide first aid training for local residents.

Kimse Yok Mu is also participating in the “Bread for Syria” campaign, distributing food, clothing and other assistance to refugees.

The Turkish charity organization Kimse Yok Mu (Is Anybody There?) constructed in a small town in one of Africa’s poorest countries, Chad, dedicated to the memory of Özgecan Aslan, who was brutally murdered in Mersin province on Feb. 11.