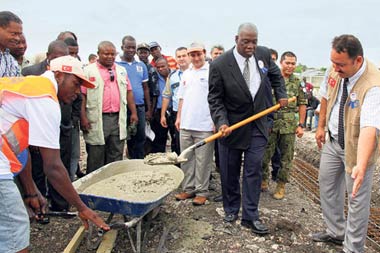 Kimse Yok Mu (Is Anybody There), a Turkish charitable association, has laid the foundation for a 46-bed hospital in the Haitian capital Port-au-Prince’s Croix-des-Bouquets district, which has a population of 500,000.

An estimated 200,000 people died in Haiti, one of the poorest countries in the world, in January when a magnitude 7.0 earthquake struck. Hunger and health problems were among the biggest problems on this island nation even before the quake, but more serious issues emerged in its aftermath as most parts of the capital were reduced to rubble.

Kimse Yok Mu extended a helping hand to Haiti’s quake victims and launched an aid campaign titled “Haiti Waits for Emergency Help” to collect donations to help victims of the devastating quake. The association distributes food to 2,000 Haitians every day and has carried out 10,000 health screenings so far.

The association, which aimed to provide long-term and permanent assistance to the country, made the decision to construct a hospital and two schools in the country. The hospital’s foundation was laid on Monday in a groundbreaking ceremony attended by top Haitian officials.

Justice and Development Party (AK Party) Samsun deputy Binnur Şahinoğlu and Kimse Yok Mu President Mehmet Özkara as well as dozens of businessmen who were scheduled to go to Haiti from the US were unable to attend because the international airport in the capital was closed following violent protests that came after preliminary presidential election results were announced, but are widely considered suspect.

Özkara delivered a message at the ceremony in which he said Turks would continue to extend a helping hand to the Haitians.

Croix-des-Bouquets Mayor Jean Saint-Ange Darius also delivered a speech during the ceremony and thanked the association. Stating that Kimse Yok Mu has always stood next to the Haitians, the mayor thanked “the generous Turkish nation” for its assistance.