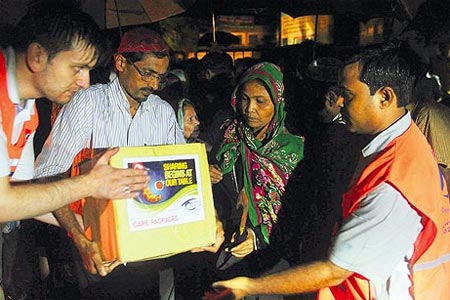 Despite the persistent rain, Kimse Yok Mu distributed aid packages by flashlight throughout the night to Rohingya Muslims sheltering in Bangladesh from the ongoing violence in Myanmar. (Photo: Today's Zaman)

Despite the heavy rain, Kimse Yok Mu, a Turkish charity, continued distributing aid packages throughout the night with the aid of flashlights to Rohingya Muslims who have taken shelter in the Cox’s Bazar district of Bangladesh from the ongoing violence in their home country, Myanmar.

Having distributed aid packages to 23,000 Rohingya Muslim refugees in Bangladesh through the incessant rain since they arrived in the region, the organization aims to help 60,000 refugees by the weekend. Refugees form long queues to receive the aid packages. One of the refugees, named Khaleza, said that she and her 4-month-old baby are grateful to Turkey, as they could not have survived if it wasn’t for the Turkish food packages. The aid packages the organization distributes contain 15 different basic food items such as rice, sugar, oil and potatoes and weigh 20 kilograms. Organization officials say that one aid package allows a family to survive for a month. The organization also hosts iftars (fast-breaking dinners) for the refugees.

Meanwhile, Organization of Islamic Cooperation (OIC) Secretary-General Ekmeleddin İhsanoğlu said his organization was working day and night to get more aid to Myanmar.

Speaking at an iftar in Jeddah on Monday, İhsanoğlu said they launched an international campaign to raise awareness about the continuing violence in Myanmar. “We are going through difficult days. My team and I have been making considerable efforts to get the world’s attention on what is going on in Myanmar,” he said.

As part of its campaign, the OIC is to hold meetings in the capitals of several OIC member countries, he further said.

İhsanoğlu said a meeting will be held on Aug. 3 in Malaysia, where the members will discuss the situation in Myanmar and possible solutions. In addition, a United Nations envoy has traveled to western Myanmar to investigate the communal violence that has left at least 78 dead and tens of thousands homeless.

Tomas Ojea Quintana flew to Arakan state on Tuesday for a first-hand look at the cities and towns where mass rioting and ferocious violence erupted last month between the ethnic Arakan (Rakhine) Buddhists and Muslim Rohingyas.

The first glimmer of violence in Myanmar occurred in June after claims that three Rohingya Muslims raped a Buddhist woman. In response, fanatical Buddhists started killing Muslims living in Arakan province and burned houses and workplaces belonging to the minority group. Rohingya Muslims are not seen as citizens of Myanmar by Myanmar’s leaders, officials and fanatic Buddhists, and as a result are exposed to discrimination.

Arakan Muslims, who escaped the massacre in Myanmar, have taken shelter in camps in the border villages of Bangladesh’s Cox Bazaar district and are struggling to survive in difficult weather conditions in makeshift camps. According to UN sources, as a result of attacks by security forces targeting Muslims, nearly 100,000 people have left their homes since the beginning of the ethno-religious tension.

Exiled Tibetan spiritual leader the Dalai Lama watched and praised a sema, or whirling dervish ceremony, during a Turkish festival which lasted from Friday to Sunday in New Delhi, promoting traditional Turkish arts and culture. The three-day festival was held for the first time last year, and this year it takes place in the popular Select Citywalk mall in New Delhi. The event was organized by the Indian-Turkish Indialogue Foundation.