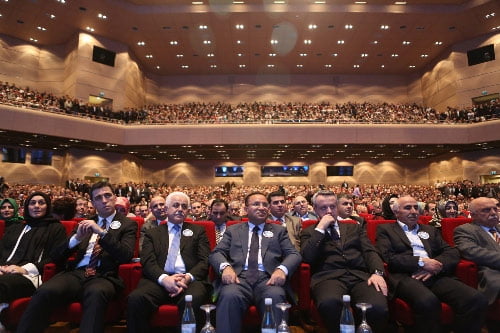 Deputy Prime Minister Bekir Bozdağ, in the middle, attended the opening ceremony of the Irmak TV on Thursday night

New television channel Irmak TV began broadcasting on Thursday night in a magnificent ceremony with blessings from senior Turkish officials, journalists and public figures. The TV channel, along with Today’s Zaman, is part of the Feza Media Group, and will mostly broadcast programs with moral, spiritual, cultural and religious content.

Irmak, meaning “river” in Turkish, was introduced to Turkey’s TV industry with an opening ceremony in İstanbul on Thursday night. Deputy Prime Minister Bekir Bozdağ, former football player and İstanbul deputy of the ruling Justice and Development Party (AK Party) Hakan Şükür and public figures from the arts, politics, sports, business and media were among the attendees.

The program was kicked off with a recitation from the holy Muslim book of Quran. Irmak TV General Manager Süleyman Sargın said in the opening speech that the station has taken religious and cultural values as basis for its programming. Sargın said they are adjusting their broadcasts based on the 24 hours of a Muslim.

Sargın said Irmak begins its broadcasting on the same day when prominent Islamic scholar Fethullah Gülen traveled to the US some 14 years ago. The chief of the TV channel said Gülen travelled all across the country with tireless efforts to preach Islam to his listeners.

Irmak TV started broadcasting at 8:00 p.m. on Thursday and a Twitter hashtag marking the launch of Irmak swiftly topped the Trending Topics on Twitter.

Irmak’s programming will include basic Islamic teachings, along with speeches and sermons by Gülen. The TV channel will broadcast athan, or the Islamic call to prayer, at prayer times. It will then follow with a special supplication Muslims recite after the daily prayers.

Gülen’s letter of congratulations to Irmak TV was also read out during the night. Gülen said Turkish people need a TV channel that adjusts its programming based on a Muslim’s daily prayers and said Irmak will be bound to Turkey’s cultural roots while broadcasting based on universal humanitarian values. He added that he believes the new TV channel will fulfill expectations and bring a new voice to the TV industry. He noted that the programs will be targeting people from all age groups and that he wished luck to those who are making it happen.

Speaking during the ceremony, Bozdağ said Turkey needs such a “river” and that the TV channel will make big contributions and guide Muslims in their path to learn and implement the Quran and the Sunna — the practice of the Prophet Muhammed. Bozdağ said the most important problem with Muslims today is that they don’t truly live and teach Islam.

“There is a need to teach everyone about Islam and the Prophet Muhammed appropriately,” Bozdağ said, adding that teaching that Quran and Islam is a significant service in the field of science.

Bozdağ noted that Irmak TV needs to be expanded to reach the entire world, like Turkish schools. He said, like Turkish schools, Irmak TV should also contribute to benefit people’s education abroad. He stated that the new TV channel should start broadcasting in Arabic, English and other languages to make it a global broadcaster.

Şükür also welcomed Irmak TV and said at a time when people are speaking about peace it is important to see such a TV channel begin broadcasting.

Suat Yıldırım from the Faculty of Theology at Marmara University said in his speech that Irmak TV will make huge contributions to the Islamic world with its religious programs and that there was a need for such a channel.

Zaman columnist and author Ali Bulaç welcomed the introduction of Irmak TV and said its existence will contribute to the public discussion of various issues.