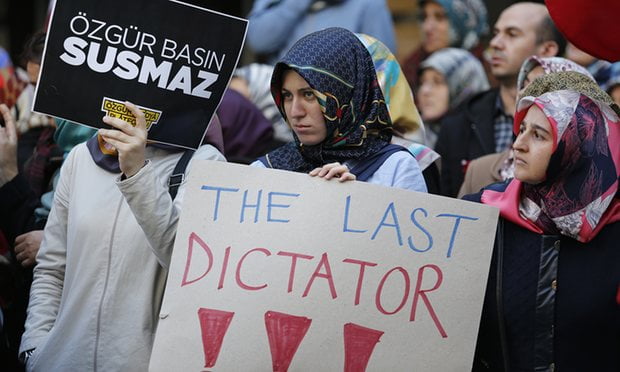 Erdogan’s shakeup of the education system is perhaps the most significant. That is the system that will see to it that its graduates know how to vote properly.

“The attempted coup is a gift from heaven,” Turkish President Recep Tayyip Erdogan said two days ago. And he is not waiting for the Muslim holiday of Id al-Adha in September to unwrap that gift. The more he accomplishes soon, the more legitimacy he will reap for his actions. While aiming for a presidential system he has managed to turn Turkey into the president’s country. If anyone is orchestrating a coup, it is he and not the army. The administrative decimation he has perpetrated in the government ministries, and especially the justice and education systems, will have implications for generations to come.

Erdogan is establishing the regime he wants even if the constitution is not amended, a regime that ensures complete loyalty, whether out of support for him or out of fear he is instilling in tens of thousands of government officials, hundreds of thousands of teachers, thousands of judges and prosecutors and army officers.

Erdogan has outstripped his predecessors, the leaders of the military coups in 1960, 1971 and 1980. So far, he has managed to extract the army from places where it could have influence in the civilian sector and return it to its bases. He has enacted reforms in the justice and education systems and suppressed the media. Now begins the stage of rebuilding the country from above. This is the stage where the will of the president will dictate the will of the people.

The shakeup in the education system is perhaps the most significant, even more than in the justice system or the army, because that is the system that disseminates knowledge, and determines curricula and indoctrination and hence also the political thinking of the generations to come. That is the system that will see to it that its graduates know how to vote properly.

The struggle for the heart of the education system is typical of Erdogan’s domestic policy since he was first elected prime minister in 2003. His first steps were cautious so as not to anger the army, which still held the whip of the constitution and still determined who would teach, how it would be taught and who would run the schools, especially the universities.

The constitution that was written in 1982 after the military coup stated that students would be educated “to recognize the privilege they have to be Turks.” In 2003, lawmakers from Erdogan’s Justice and Development Party proposed bills stating that the universities would “create people who accept the Turkish Republic and its citizens and a unified entity…and inculcate in the hearts of the students the awareness of service [to the state] based on the nationalist principles of Ataturk.”

This wording conformed to the ideas of the military coup, but its intent is not hidden. Students and teachers must be committed to a certain ideology.

The commitment is still there but the ideology has changed. A few years later, Erdogan would promote the law revoking the ban on women covering their faces in schools, arguing that the ban was harmful to freedom of expression and individual rights. In 2008 the army could still threaten Erdogan and his party with indictment for statements of support for religion, but in 2010 it could no longer rise up against the new prevailing mood.

That was the year of the great rift between Erdogan and his erstwhile ally, the preacher and head of the largest religious order in the country, Fethullah Gulen, who left Turkey in the 1990s when he realized the army was about to arrest him. Erdogan then launched a two-pronged campaign aimed at the heart of the education system. He took lethal aim at Gulen’s network of schools, which included private schools that prepared students for matriculation and university entrance exams. Erdogan ruled in 2013 that these schools were unnecessary and that public schools should carry out this work. But his purpose was to slash Gulen’s influence in the education system as well as the income from the schools, which supported Gulen’s religious order.

Erdogan also changed the makeup of Turkey’s Supreme Educational Council, established after the 1980 coup, filling it with his supporters. Of the 21-member council, seven are appointed by the president, seven by the cabinet and seven by an inter-university committee. But in fact, all appointees have to be approved by the president. This council has major influence over curricula and faculty appointments. The president appoints the university presidents and also appoints the rectors, from among three candidates the Supreme Educational Council recommends. The heads of Turkey’s 180 universities and the members of their boards of directors, public and private, require the council’s approval for appointments.

University regulations prohibit teachers from making statements to the media that are not connected with their academic pursuit; in other words, politics are off-limits. What constitutes political statements is up to the university rectors and presidents who are, as noted, subject to the council.

In January of this year, nearly 1,400 lecturers were investigated because they had signed a petition protesting the brutal war against the Kurds in southeastern Turkey. Most of them were fired on charges of supporting terror because of a vague clause in the law against terror.

The education system was built so that graduates of religious high schools or religious institutions could not enter secular tracks at universities. These schools were considered trade schools, so students’ grades were calculated differently, discriminating against them. Because they could not get into the regular faculties in the universities, they could not get government jobs, which required a degree from those faculties. Erdogan has done away with that rule, claiming he was working for greater equality among students.

The empty chairs of the 15,000 deans who resigned this week on orders from the Supreme Educational Council will soon be filled by thousands of Erdogan supporters. They will be responsible for new curricula, textbooks and teaching methods, and for determining the permitted areas of research and boundaries of academic discourse. Erdogan will not need an Iranian guidebook to effect his intended cultural evolution in education. He need only look to the writings of Mustafa Kamal Ataturk, the father of the Turkish republic, who in the first decade of his rule introduced a cultural secular revolution into the justice system and the education system. The cultural revolution in Iran sparked a mass brain drain; Turkey could face a similar threat.