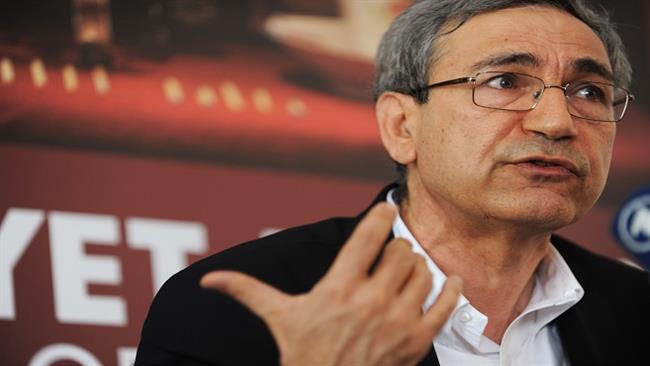 Prominent Turkish novelist and recipient of the 2006 Nobel Prize in literature, Orhan Pamuk, has criticized the government’s large-scale crackdown in the aftermath of the failed July 15 coup, warning that Turkey is heading toward “a regime of terror.”

“In Turkey, we are dramatically putting behind bars all those who struggle for freedom of expression, and criticize the government even slightly,” Pamuk said on Sunday.

The 64-year-old author argued that the ongoing heavy-handed crackdown is being driven by “the most ferocious hatred,” adding, “Freedom of thought no longer exists. We are distancing ourselves at high speed from a state of law and heading towards a regime of terror.”

Pamuk, who is known to be a vocal critic of President Recep Tayyip Erdogan, also called for the immediate release of all detained intellectuals and their fair trial as free individuals.

Pamuk’s remarks came a day after Turkish police forces arrested well-known journalist, Ahmet Altan, and his brother, Mehmet Altan, as part of an investigation into those suspected of affiliation to the network of US-based cleric, Fethullah Gulem, who Ankara accuses of having masterminded the botched putsch.

Ahmet was a columnist with major Turkish-language Hurriyet and Milliyet newspapers before he founded the liberal and opposition daily Taraf in November 2007.

He stepped down as Taraf editor in chief in 2012, and has written several novels. Taraf was closed under a statutory decree due to its alleged links with the Gulen movement.

Mehmet Altan, a renowned academic and economist, is the author of several books on politics in Turkey.

The Hurriyet newspaper reported that Altan brothers were being investigated over comments in a talk show broadcast on Can Erzincan TV, a station known for its critical stance against the government, on the eve of the failed coup. The newspaper did not provide any information about the content of the talk show.

A faction of the Turkish military declared itself in charge of the country on the night of July 15. Renegade military personnel made use of battle tanks and helicopters to fight loyalists to the incumbent government in Ankara and Istanbul.

The coup attempt was suppressed as people turned out on the streets to support Erdogan and his ruling Justice and Development Party.

At least 246 people were killed and more than 2,100 others sustained injuries in the coup attempt.

Gulen has condemned the coup attempt and denied any involvement in the violence.

Turkey’s resigned interior minister, Efkan Ala, said last month that the number of individuals detained for questioning or arrested in the aftermath of the failed coup is nearly 100,000. By far, the largest number of dismissals from government jobs has been in education sector.

Ala also announced that Turkey looks to hiring 20,000 additional armed services personnel to replace those removed.