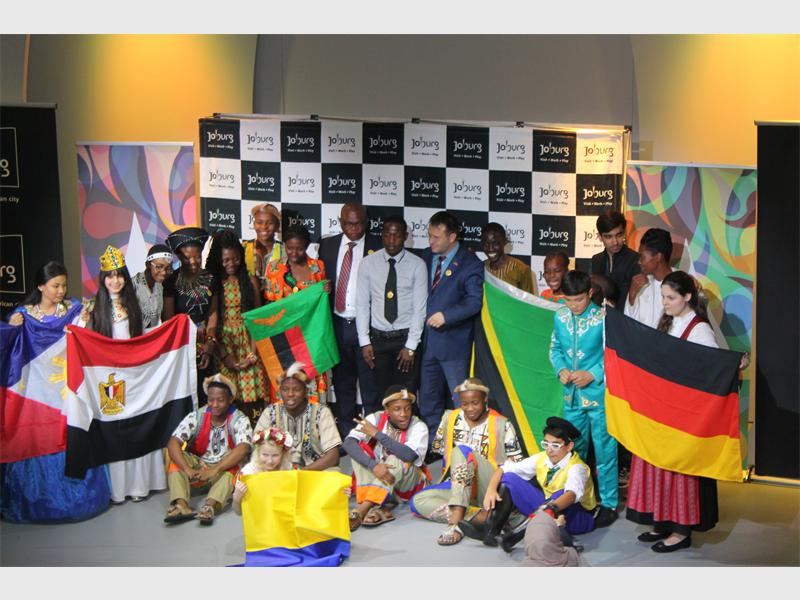 Some of the delegates of the International Festival of Language and Culture with some of the officials from the City of Johannesburg.

The tables were turned when the youth was in charge and showed adults how things should be done.

On 20 April, the City of Johannesburg hosted 50 talented school-going delegates in Melrose Arch at a dinner event ahead of the International Festival of Language and Culture (IFLC).

At the dinner, the delegates were joined by the City’s Junior Mayoral Committee, and the emcee of the event was Junior Mayor, Innocent Marubini who did a stellar job teaching guests a thing or two about Johannesburg. Marubini made the point that those in attendance left knowing how to at least say hello the Johannesburg way.

On the entertainment arena, the stage was open for all delegates to showcase how it is done in their different countries. Age worked to their advantage and the guests supported all the acts that were on stage. Although most of them had never met before, the youth did not behave like strangers. The delegates showed a desire and interest to learn about the different cultures from the international attendees present.

The IFLC is an annual celebration and showcase of the diverse linguistic talents from across the world. The purpose of the festival is to promote a better understanding of world languages and cultures and to witness exceptional performances by young people of diverse nationalities.

Welcoming the delegates, acting Mayor Geoffrey Makhubo said the City was honoured to host the participants from 14 different countries.

Public relations and communications manager of Johannesburg Tourism, Laura Vercueli, said the City gave the delegates a warm Jozi welcome. “Given its cultural diversity, warmth and vibrancy, Joburg is the ideal city to host this event,” she said.

“This is really a dynamic, colourful gathering of future global language experts and cultural ambassadors.”

The official festival was held on 21 April at the Nelson Mandela Theatre where there was further discussion on languages and culture.

Spectrum Turkish School in Yas city of Romania moved to its new building on Tuesday with a ceremony. Turkish schools which have been operating in Romania for 21 years continue to develop. The school which has a capacity of 500 students gained new building.