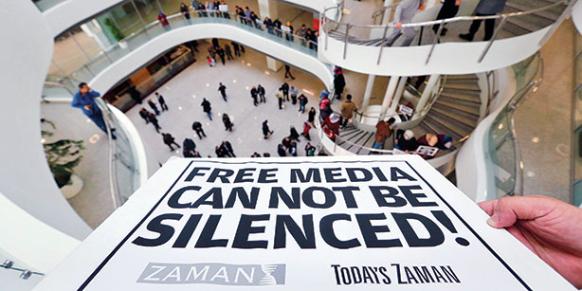 The Committee to Protect Journalists (CPJ) on Wednesday released a special report for 2014 designating Turkey on the world’s 10 worst countries for journalists, once again underlining the country’s deteriorating situation for freedom of expression and free media.

According to the US-based organization, Turkey is among the world’s 10 worst countries for jailing journalists.

The CPJ report lists the world’s 10 worst countries for journalists as China, Iran, Eritrea, Ethiopia, Vietnam, Egypt, Syria, Burma, Azerbaijan and Turkey. China, with 44 journalists in jail, leads the list, and a total of 220 journalists are imprisoned across the world, according to the report.

The CPJ highlighted a Dec. 14 operation as an attack on free media in Turkey after scores of journalists — along with television producers, scriptwriters and police officers — were detained on an accusation of plotting a coup against the Turkish state. The detentions came after the Justice and Development Party (AK Party)-led government made efforts to intimidate advocates of a free media following graft probes that implicated then Prime Minister and current President Recep Tayyip Erdoğan.

The government-led Dec. 14 operation detained Ekrem Dumanlı, the editor-in-chief of one of Turkey’s largest dailies, Zaman, and STV head Hidayet Karaca, both of whom are inspired by US-based Islamic scholar Fethullah Gülen, who has been targeted by Erdoğan and accused of plotting a coup against his governance in the country.

Dan Morgan, former East European and Turkey correspondent for The Washington Post, has called the recent developments and the detention of columnists, broadcasters, editors, scriptwriters in Turkey “deeply troubling and disappointing.”

“Many of those targeted on the basis of questionable charges appear to belong to several civic movements of the kind that are the backbone of healthy, pluralistic societies. The accusation that these ‘parallel structures’ pose a threat to the state has it exactly backwards. Strong civic movements that force accountability on government are essential to a country’s political and economic success in the long run,” Morgan said in a comment to Today’s Zaman.

Ann Crittenden, another American author and journalist, has labeled the recent arrests of Turkish journalists and writers affiliated with the Hizmet movement inspired by the teachings of US-based Islamic scholar Fethullah Gülen “a harsh blow at the country’s vanishing press freedoms.”

“In attempting to silence its critics, the Erdoğan government has taken another backward slide toward authoritarianism, to the dismay of all who respect the Turkish nation,” Crittenden told Today’s Zaman.

Leo Lefebure from Georgetown University also condemned the recent crackdown on free media in Turkey, including the Zaman newspaper and Samanyolu television, expressing his “deep concern and dismay.”

“A free press independent of governmental control is essential to the life of a healthy society. Raids on news organizations constitute an assault on the freedom of expression and debate that are vital to democratic communities,” Lefebure said in an interview with Today’s Zaman.