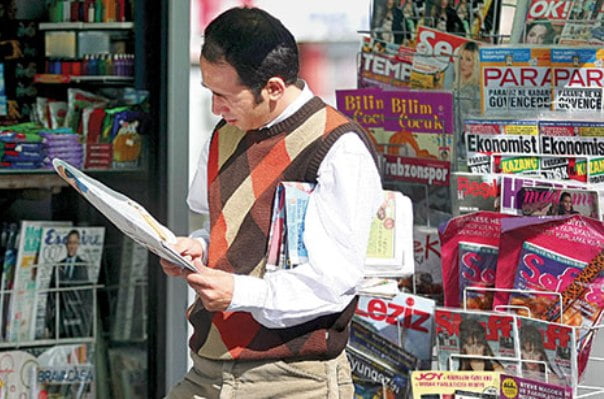 As the intense pressure on media that are critical of government policies becomes clear, new details of the double standards in Turkey’s state-media relations have been revealed.

Separate sources have suggested that several public institutions prefer pro-government dailies and TV stations over other media, an initiative that follows Prime Minister Recep Tayyip Erdoğan’s statements about “the opposition that cooperates with an international conspiracy seeking to topple the government.” Erdoğan holds this alleged conspiracy — including the religious Hizmet movement — responsible for an ongoing investigation into alleged corruption and bribery within his ruling Justice and Development Party (AK Party) government.

Erdoğan’s government has exploited inspection mechanisms and bureaucratic procedures to put pressure on political dissent on various occasions since it came to power in 2002. This has also been seen in the media.

The editor-in-chief of the Bugün daily, Erhan Başyurt, shared a number of figures and details on Friday relating to public institutions openly taking sides with pro-government media when it comes to allocating their advertising budget. Başyurt said in his column that pro-government dailies and TV stations reported higher circulation and rating figures than the actual numbers in order to take a larger share of public advertising. The Bugün head says public institutions turn a blind eye to these false figures.

As early as Thursday, Turkey’s best-selling daily, Zaman — whose daily circulation is 1.2 million — said it learned that the Turkish Satellite Communications Company (Türksat) had removed Turkey’s best-selling Zaman and three other dailies from its advertising list in an unexpected decision. Türksat failed to comment on this decision, but they had earlier agreed to have ads published in Zaman. Observers argue that media monitoring should be carried out by an independent institution in Turkey, recalling that Zaman has few options to appeal such a decision that excludes it from the ad list.

State-run companies allocate their ad budgets in relation to the popularity of media groups, so those with higher circulations receive larger shares. However, figures show that public institutions have failed to comply with this measure. Başyurt shares figures from Nielsen Media Research (NMR), a global measurement and information company, which also provides statistics on media users in Turkey.

According to NMR figures on the allocation of ads from Jan. 1 to Feb. 11 of this year, state-run bank Halkbank had 4,840 seconds of advertisements run on Turkish television. Around 90 percent of this was aired on the news channel 24, while the rest was shared betweeb Ahaber, Ülke and Show TV, all four of which are pro-government TV stations. Likewise, public bank Ziraat Bankası had 70 percent of advertisements from Jan. 1 to Feb. 11 aired on Ahaber while the rest went to 24, ATV and Galatasaray TV respectively. State-run construction firm Emlak Konut also shared its ads between Ahaber and 24. The remaining mainstream TV stations, CNNTürk, BUGÜN televizyonu, Samanyolu Haber, Kanaltürk, Kanal D, Samanyolu and NTV did not even receive 1 percent from these three state companies in that period.

In the NMR ad allocation report for daily newspapers from Jan. 1 to Feb. 11, Ziraat allocated all its ads to Sabah, Star and Posta while Halkbank, state-run Vakıfbank and Turkey’s national flag carrier, Turkish Airlines (THY), left dailies critical of the government out of their ad lists.

THY stopped distribution of the Zaman, Today’s Zaman, Bugün and Ortadoğu dailies to business-class passengers on its planes in December of last year without providing any explanation, though other dailies are still being handed out on board. Observers and passengers have criticized this decision as a violation of the equality and freedom to receive news.

Public firms were careful to ensure the Bugün, Zaman, Sözcü and Taraf dailies did not receive any advertisements from Jan. 1 to Feb. 11, Başyurt says, adding that the same double standard has continued to this day.

Various media representatives have said a threatening pattern of government pressure on the media is taking hold in Turkey, at the expense of freedom of the press and democracy. The editor-in-chief of the Habertürk daily, Fatih Altaylı, who has been accused of manipulating the findings of a 2013 election poll after speaking with a pro-government official at the same daily, defended himself in a televised interview aired on CNN Türk on Monday, saying there is tremendous government pressure on the Turkish media.