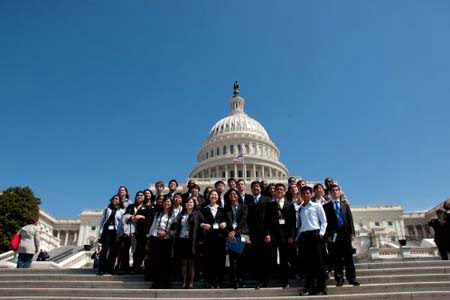 Former participants of the essay contest pose for a group photo in Washington DC.

Gulen Institute, jointly established by Houston University Graduate College of Social Work and Institute of Dialogue in Texas continuous to offer solutions and encourage action for challenges the contemporary world is facing.

Youth Platform, which is an annually-held international essay contest under the institute’s umbrella, has recently announced the winners of 2013 essay contest with the prompt “Hospitality in the Global Village” which encouraged high school students to reflect on immigration problems and offer potential solutions.

Having received over 500 hundreds essays from 40 countries around the world and 30 states within the US, the contest committee announced the top three places along with top 30 students who have qualified for award ceremony and a complimentary Washington DC trip. George Abraham from Florida took first place for his essay: “Immigration and the Artistic Sense of Cultural Identity”. Gawoon Shim from South Korea received second place for his essay: “Hosts and Guests: We Must Learn to Live Along”. Vaishnavi Rao from California won third prize for her essay: “The Immigration Challenge: The Role of the Indian Government in the Future of Assam”.

Among this year’s winners is a student from Private Atlantik Ahmet Ulusoy Social Sciences High School, Turkey who addressed the immigration problem in the US with introducing his ‘Noah’s pudding method”. Hasan Tugrul Akinci took the 9th place and is invited to the award ceremony to take place on April 10 in Washington DC. Akinci expressed his happiness and summed up his approach: “There is no assimilation in “Noah’s pudding method” but individual identities in a harmoniously coexisting society made up of individuals enriching one another’s values.”

U.S. Congressmen Ted Poe and Gene Green will be the co-chairs of the award ceremony on April 10. Following the award giving, the finalists will present their essays and exchange opinions in a discussion session moderated by Humboldt University English Department Chair Prof. Tom Gage and Houston University Department of Politics Chair Gregory Weiher.

In addition to participating in the award ceremony, students will have the opportunity to meet honorable U.S. Congress members, participate in follow-up discussions, visit local universities and think-tank organizations, and enjoy tourist attractions in Washington, D.C.

Source: Excerpted from the piece published [in Turkish] on Zaman newspaper, 05 March 2013. English translation is retrieved from HizmetMovement.Com

The tensions erupted into the open last month with a corruption probe that led to the resignation of four government ministers and threatened to ensnare Mr. Erdogan’s family. The government has since purged hundreds of police officials and prosecutors and sought to assert control over the judiciary. It also drafted legislation expanding the government’s power to appoint judges and prosecutors, further breaching judicial independence, and has prevented journalists from reporting freely.