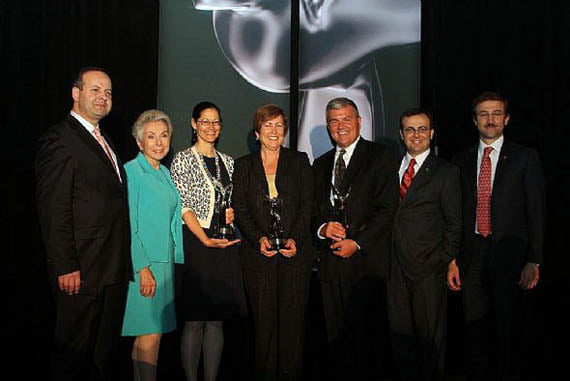 2013 Annual Peace and Dialogue Awards by the Chicago-based Niagara Foundation were presented to their honorees at an event on September 16th in University Club of Chicago, a historic building of the city.

At the ceremony emceed by Rob Stafford of NBC 5, the awards were given in the categories “Commitment”, “Public Service” and “Fethullah Gulen Award.” In attendance of the 8th annual event were numerous prominent figures in politics, education and media.

Elmhurst University Religious Studies professor Paul Parker read out the message by Niagara Foundation’s Honorary President Fethullah Gulen, who was unable to attend the event due to health problems. As a past Fethullah Gulen Award honoree, Parker noted that it’s an honor to read a letter from Gulen who is an example altruist scholar, as he put it.

In his message to the ceremony, “Only those whose hearts are overflowing with love can build a bright future for the world. And those who intend to transform the world need to start with themselves. When setting out on a journey for a better world, they need to cleanse their hearts of grudge, hatred, envy and ill-intentions. The world has goodness, kindness and honesty in its essence which will surely unveil itself sooner or later. Those dedicated to enlighten and extend a hand to others are virtually like guardian angels with their radiant hearts. By humbly presenting its annual dialogue and peace awards, Niagara Foundation therefore would like to recognize the efforts by such heroic hearts. The idea behind is to thank God for bestowing such example people on us and to encourage everyone to follow these people in service to humanity. I would like to wholeheartedly thank and commend all the honorees and organizers of the night.” Gulen said.

Fethullah Gulen Award honoree, DePaul University’s emeritus professor of law M. Cherif Bassiouni said, “The Gulen Movement is transforming faith into action and piety into community service. This is a call for us too. This is also the message of the Abrahamic faith that many of us have in common.” He further noted that he was greatly happy to see Gulen on the screen and to hear the appreciative remarks on Hizmet Movement. Noting that Gulen is a remarkable Muslim and humanist, he said it’s an honor for him to receive the award.

The US needs people to come and work

Community service award honoree, The City Club of Chicago Chairman and Roosevelt University Political Science and Public Administration Chair Paul Green said, “Like Niagara Foundation, the City Club is too open to dialogue and objective talk. The more dialogue is established, the more people get to know and understand each other and thus reach a common ground. They will be able to at least recognize and respect each other.”

Noting that retirement rate in the next generation will increase by 100% as opposed only 17% in workforce, “The US needs people to come and work and to become its citizens,” Green noted.

This year’s Victorian State Parliament Iftar Dinner took place in Sofitel Hotel’s Latrobe Ballroom on Monday, 5 June 2017. Organised by the Australian Intercultural Society (AIS), the event was attended by over 200 guests, including about state and federal members of Parliament and representatives from the Melbourne consular corps.