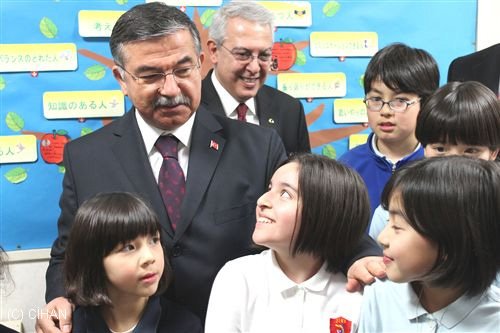 Besides his official contacts on various levels in Japan, Turkish Minister of National Defense Ismet Yilmaz visited the Turkish-operated Jingumae International Exchange School located centrally in the capital Tokyo and was briefed on the school’s activities during his stay.

Board President of Japan Horizon International Schools Mustafa Aslan and the school’s principal Kenan Ulu greeted the minister in person, as he entered the school yard. The students welcomed Yilmaz with flowers. Having chatted with the students for a while, the minister posed for cameras with them. He was briefed on the school as he toured it in company with the principal and board president. Yilmaz asked questions, in particular about the education system, academic staff and students along the tour. Afterwards, Mustafa Aslan briefed him on the affiliated Turkish schools across the country as well. The visit came to an end with the minister being presented a plaque by Mr. Aslan.

Jingumae International School shares its campus with a Japanese public school in Harajuku, one of the most privileged locations of Tokyo. Populated with students from 21 different countries, it is among the 22 schools accredited by Japanese Ministry of Education. In addition, it is the authorized Cambridge University representative in Japan.

Source: [in Turkish] on Star newspaper, 06 March 2013. English translation is retrieved from HizmetMovement.Com

Customs and Trade Minister Hayati Yazici visited the local Nurorda International Kazakh-Turkish High School besides his official visits on day-two of his Astana itinerary. As a part of his agenda, Hayati Yazici hosted by the Kazakh Finance Minister Bolat Jamisev, met with the Turkish businessmen engaged in Kazakhstan at Rixos President Hotel on June 21. […]

BÜLENT KENEŞ June 5, 2012 His life changed completely when a Turk moved to the apartment block where he was living in Moscow. His parents had divorced and his mother had become an alcoholic and a drug user. “I have turned into a street kid,” he had said. One day he met a member of […]