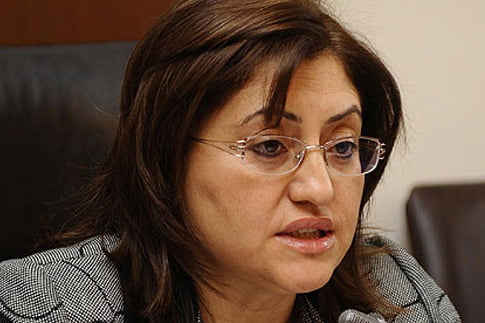 Family and Social Policy Minister Fatma Şahin has praised the Journalists and Writers Foundation (GYV) for its members’ courageous coverage of important issues at a time when the country is taking steps for democratization.

Şahin’s remarks came during a panel discussion on women’s issues held by the GYV and Peace Islands Institute at New York’s Türkevi (Turkish House) on Wednesday. She said the foundation leads the way for the scientific and academic world with its news coverage. She highlighted that the GYV not only brings problems under the spotlight but also suggests solutions for them.

Şahin arrived in New York this week for a meeting of the United Nations’ Commission on the Status of Women (CSW).

Speaking about the improvements achieved by Turkey in protecting women’s rights, Şahin said she sees gender-based violence as a human rights violation and one of the leading problems that hinder economic development. She added that her government introduced positive discrimination to increase school enrollments of girls.

While highlighting that everybody — regardless of their gender, age and physical disability — must enjoy their human rights, receiving an education and health services and employment, Şahin said her ministry supports every individual in Turkey in their endeavor for an honorable life.

She recalled that every baby in Turkey is born with health insurance and everybody receives health services free of charge until the age of 18. Şahin noted that Turkey is among the top 10 countries to reduce its maternal and child mortality in recent years.

The minister added that 10 years ago, when the current government had just begun to serve, 33 percent of the population was living on less than $4 a day, while this figure has now dropped to 2.7 percent.

GYV the first Turkish NGO as consultant to UN

Addressing the audience at the panel, GYV President Mustafa Yeşil said a women’s platform is working under the umbrella of the GYV and has held an international conference titled “Aile” (Family), which brought together 500 academics and representatives of civil society organizations from 50 countries.

Yeşil recalled that the GYV is the first institution to earn a consultative status with the United Nations Economic and Social Council (ECOSOC) from Turkey. He noted that the foundation will maintain its cooperation with institutions that serve the well-being of humanity. “The Journalists and Writers Foundation has been inspired by the teachings of the foundation’s honorary president, Fethullah Gülen [a Turkish Islamic scholar], and has been working in cooperation with over 100 institutions from 146 countries on five continents,” he added.

Regarding the goals of the foundation, Yeşil said the GYV is seeking to gather hundreds of prestigious figures from the worlds of politics, science and the arts and establish a ground where they can co-exist with compromise and respect.

In her address to the participants during the panel, Hilal Elver, a research professor of Global Studies at the University of California Santa Barbara, said the Western understanding of feminism is no longer accepted to represent the only global one. While noting that the West is imposing its own definition of feminism as the only one, Elver emphasized the importance of cultural and religious differences in forming one’s or a group’s own definition of feminism.