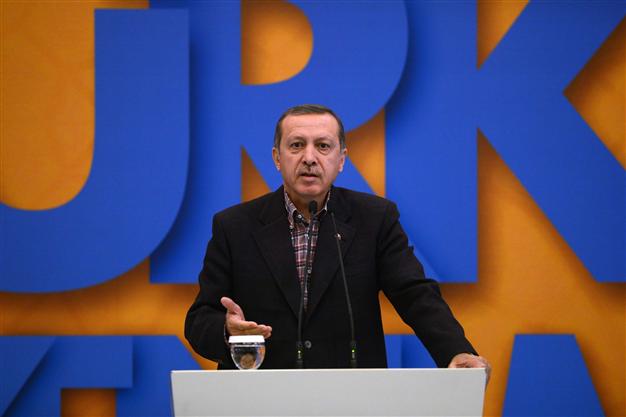 Prime Minister Recep Tayyip Erdoğan, while defending an ongoing government-sponsored wave of purges of public officials, said on Sunday that the government will carry out a “witch hunt” if that is how critics define the purges.

“If reassigning individuals who betray this country is called a witch hunt, then yes, we will carry out this witch hunt,” Erdoğan said while delivering a speech at the 22nd Consultation and Assessment Meeting of his Justice and Development Party (AK Party) in Afyonkarahisar.

The AK Party government, frustrated by a major graft investigation that went public on Dec. 17 of last year, has been quick to reassign public officials en masse in response to the operation. The probe implicated several former Cabinet members and senior government officials, and as many as 15,000 police officers and hundreds of members of the judiciary as well as dozens of bureaucrats at public institutions have been reassigned since Dec. 17. The fact that no investigation was launched before those officials were sacked and that most of the officials were not given an explanation for their dismissal has led to comments that the government is carrying out a “witch hunt” against its critics.

There are rumors that the only criteria behind these purges is links to a “parallel state,” a term the government has been using to define the Hizmet movement, which is a grassroots movement based on voluntary participation to spread interfaith dialogue and tolerance, with a particular emphasis on education. The government has been at odds with the Hizmet movement since the graft operation and it has been reassigning public officials known or suspected to be close to the movement.

“Anyone who is negligent in this struggle will betray this nation. Anyone who takes steps back, [or] intends to compromise and forget what has happened in the past will put a black mark on the trust of our people. Anyone who keeps silent by showing no reaction or who bows to threats and blackmail will go down in history as they are,” the prime minister said on Sunday. His remarks came as clear encouragement for AK Party officials and members to carry on their “fight against Hizmet.”

Most of the removed public officials have been appointed to less prestigious positions. Recent media reports have said certain ministries are planning to dismiss the reassigned officers in the upcoming weeks. The officials will allegedly be dismissed on charges of engaging in illegal wiretapping activities; leaking or destroying important data; misconduct; and acquiring information through illegal means.

The prime minister has also implicitly urged citizens to report members or followers of the Hizmet movement to the government, and said that the government would “take action” against them. “This is not a simple struggle,” he said.

In addition, Erdoğan lashed out at those talking about the tragic death of Berkin Elvan, a teenager who died because of an injury sustained when he was hit in the head by a police tear gas canister during the Gezi Park protests last summer. The young boy died in March after spending nine months in a coma. Reports said Elvan was on his way to buy bread when he was hit at a close range with a tear gas canister fired by riot police in İstanbul’s Okmeydanı neighborhood.

However, the prime minister does not see it like that. “They [critics of the government] are trying to exploit the deaths of some people. They keep talking about the incident in İstanbul, about Berkin Elvan. He [Elvan] had a mask on his face, a slingshot in his hand and explosives in his pocket. But some media outlets say he was going to buy bread. Who would go to buy bread with a mask, a slingshot and explosives?” Erdoğan said.

In an earlier speech in mid-March, the prime minister claimed that Elvan was a member of a terrorist organization and defended the police who killed him.

Prime Minister Recep Tayyip Erdoğan’s government, which accused the Taraf daily of being a “traitor” for publishing secret state documents last month that include a covert plot against Turkish Islamic scholar Fethullah Gülen and the profiling of citizens, has lifted the confidentiality of some National Security Council (MGK) documents to be released by its partisan media outlets.