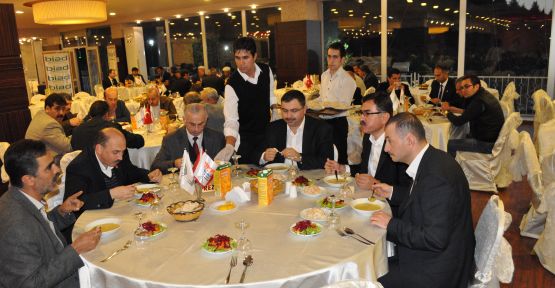 In relation to month of Muharram, friendship programs were organized in Istanbul and Ankara as well as several cities of Anatolia including Tunceli, Balikesir, Corum and Tokat in November 2013.

Rahmi Yaran, The Ecumenical Patriarchate of Constantinople Primate Bartholomeos, Iran Chief Consul Representative Murtaza Ifer, Council of Congregation Foundations Minority Foundation representative Laki Vingas, and Chief Consul Representative and artist Bedia Akarturk. In the program, hymns were sung, the Mevlevi Sema Ceremony was performed and Qur’an was recited. According to the Ahlul Bayt belief, during Muharram knives are not used, no water, nor meat is consumed; thus these items were not present on the dinner table.

The president of The World Ahlul Bayt Foundation Fermani Altun has expressed that agony is all over the Islamic world and said that there are claims to establish peace between sunnis and alawites. However, he added that there is no fighting between the two, there is no such problem, and that the problem is constitutional and it only arises because of the way the current system is set up. He noted also that there were no such conflicts of belief, and that the problem originates from outside powers. Muftu of Istanbul Rahmi Yaran prayed that we never witness a disaster like Karbala and he thanked the Ahlul Bayt Foundation for the Iftar Dinner. Primate Bartholomeos has said that there are wisdoms in our differences and we should try to understand these differences.

In Ankara, in a program co-organized by Anatolian Religious Society and Haci Bektas Veli Culture Education and Research Foundation, Kemal Kaya, the president of the Foundation, said that the Battle of Karbala where the Prophet Muhammad’s grandson Hussein and his 72 friends were martyred, should be understood properly in its own contextual aspects and should teach us the necessary lessons.  Mr. Kaya has added that our responsibility is to convert this unfortunate event into a means of unity and dialogue rather than hatred and separation. Mr. Kaya has stressed that we shouldn’t be offending each other in the month of Muharram and quoted from Mevlana:  “Those who get along are not people that speak the same language but those who share the same emotions”.

In Balikesir, Tokat and Corum the governors, mayors, police department officers, bureaucrats, businessman, alawite dedes (alawite religious figures), civil society representatives and citizens have joined the iftar (fast breaking dinner) and friendship program organized by several associations of businessmen. People from different parts of the society have broken their fast together with the prayers said by alawite dedes. In Tunceli, in the program organized by Tunceli Munzur Education Foundation, the school principle delivered a speech, in which he emphasized that, in this month, we are sharing the mourning of Karbala and we are taking further steps towards unity and friendship.