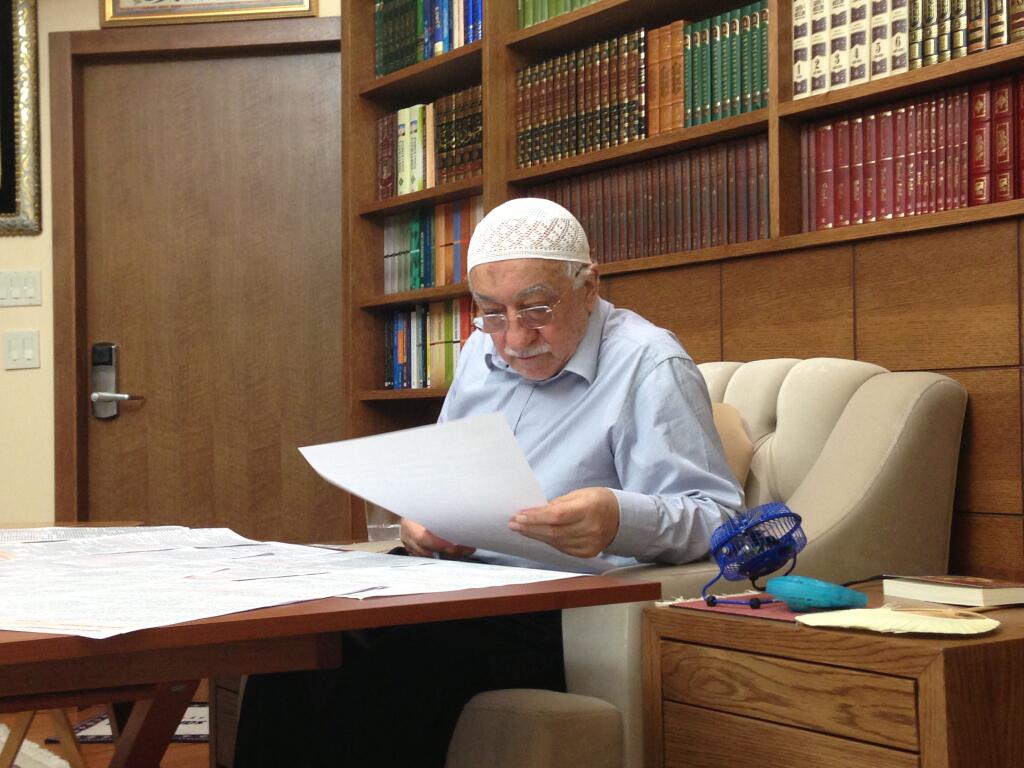 In an article for the New York Times, the man behind the recent coup attempt in Turkey, Fethullah Gülen, wrote the following: “At a time when Western democracies are searching for moderate Muslim voices, I and my friends in the Hizmet movement have taken a clear stance against extremist violence, from the Sept. 11 attacks by Al Qaeda to brutal executions by the Islamic State to the kidnappings by Boko Haram.” He defines his movement as a “moderate Muslim voice” compared to the violent “Islamic” movements all around the world. Such a definition has spread in academic and public discourses in the West, particularly since the 9/11 attacks. Some influential book titles on this topic reflect the trend: “Toward an Islamic Enlightenment: The Gülen Movement”; “Islam and Peacebuilding: Gülen Movement Initiatives”; “The House of Service: The Gülen Movement and Islam’s Third Way”; and so on.

It is therefore no surprise that Graham E. Fuller, the former vice-chairman of the CIA’s National Intelligence Council, asked the following question and answered himself: “We are talking about a critical issue: what kind of movements will represent Islam’s future? ISIS? Al-Qaeda? The Muslim Brotherhood? As Islamic movements go, I would rank Hizmet high on the list of rational, moderate, socially constructive and open-minded organisations. It is not a cult; it sits squarely in mainstream modernising Islam.” Fuller’s logic is hardly an exception in the West; rather it reflects the moral high ground claimed in the West when it comes to Islam in general and the Gülen movement in particular. In the mainstream Western media, the movement and “moderate Islam” have almost the same meaning. Almost every think-tank report as well as the above-mentioned volumes underline Gülen’s “moderate and modern” views and his opposition to violence, and praise his “non-profit organisations that promote peace, tolerance and interfaith dialogue.”

Why has this been the near-hegemonic interpretation of the Gülen movement in the West? We argue that this is so mostly because it makes the dichotomy between a “good Muslim” and a “bad Muslim” possible and thinkable. As Mahmood Mamdani showed clearly, this dichotomy is a key through which the West is able to discipline Islamic societies. This becomes clearer when it comes to how the West uses violent “Islamic” movements in disciplining Islamic societies all around the world. For example, Barack Obama, in his speech at the UN General Assembly on 24September, 2014, said, “It is time for the world — especially Muslim communities — to explicitly, forcefully and consistently reject the ideology of organisations like Al-Qaeda and ISIL.” Obama’s demands and commands of and to Muslim societies are reminiscent of what Michel Foucault avers in his classical treatise Discipline and Punish about the simple workings and logics of disciplining the wider society. For Foucault, “the agent of punishment must exercise a total power, which no third party can disturb; the individual to be corrected must be entirely enveloped in the power that is being exercised over him.” This, however, is the case only for prisoners behind bars, although the power tends “to cover the entire social body”. Beyond the prison walls, individuals cannot be “entirely enveloped” and exercising “total power” on the whole society is impossible. At this stage, prisoners turn into the very agents of the exercise of power in disciplining the whole society.

As to how “independent” individuals in society are disciplined by prisoners, it should be noted that the majority of Muslims who play no role whatsoever in violent acts are still disciplined by the very existence of violent Muslims. This is the main way that a “bad Muslim” functions in the Western-dominated world. At this point, our “good Muslim” enters the scene. Without a repeated articulation of what “they” — non-violent Muslims — actually are, speaking about what “they” are not cannot produce an identity through which ordinary Muslims can prove their sincerity. As such, the existence of well-accepted examples respecting Western modernity help to avoid the confusion that ordinary Muslims encounter during the condemnation of violent groups. The Gülen movement is one of the well-known examples of such Muslim groups promoting “peace, tolerance, and interfaith dialogue”, respect for Western values and opposition to violent methods.

One of the ways with which the Gülen movement is firmly pegged to the wider western world is its ability to connect with the western norms of liberal global governance. The movement has always been keen to adapt the western-liberal cooperative problem-solving mechanisms such as the EU norms. A particular point of conflict with Turkey’s ruling Justice and Development Party (AKP) policymakers helps Gülen to cast the movement as the norm-sharing partner of the West. This has been the case particularly in areas of peace and conflict resolution. Whenever the AKP opted for cooperating with regional stakeholders who shared its ideological world-view, the Gülen movement preferred western approaches to conflict resolution. Nothing demonstrates this better than the row that erupted over Israel’s attack on the Mavi Marmara Freedom Flotilla in 2010, which left nine Turkish peace activists dead. While Israel was quick to assert that the AKP government was en route to align Turkey with the likes of Hamas, Hezbollah and Iran, the Gülen movement immediately and unequivocally sided with the West’s strategic ally, Israel.

It is necessary to remember that dualisms such as secular humanity versus religious barbarism or obscurantism versus modernism are not simply linguistic plays reflective of an outside reality but rather performative and productive of policies/practices. This is another vital venue that brings the west and the Gülen movement together through the latter’s ability to resonate with and tap into the western discourses and regimes of human rights and liberal democracy. The group has a global network of education, business and media that promotes discursively and reproduces these regimes. Post 9/11 discourses of global security and the “Global War on Terror” under the auspices of the US and other western states presented a golden opportunity for the movement to mark its subject position in opposition to political Islamists’ alleged Islamic credentials and alternative security policies.

The empowering nature of this discursive-cut is such that the Gülen movement has successfully adopted the western narratives of alterity and discourses of insecurity. This in turn helped the group to seek a partnership with hegemonic security governance based on a shared western identity and policies, as in the case of the US ideology of democracy promotion. Here the Gülen movement’s discursive representation of the AKP and Turkey’s controversial foreign policy in the Middle East (from the political support for Hamas to the allegations of Turkey as a gateway for returning European foreign fighters) has functioned as an important meaning-making strategy affecting the formation of self/other relations between Gülen, the AKP and the West. These relations have been yielding concrete policy outcomes. The Gülen movement seemed aware of this and made sure that the AKP’s political identity has long been reinforced accordingly by discourses of alterity constructed vis-à-vis the radical militant organisations. It is in part through such a successful meaning-making strategy that the West constructs its mirror image in the movement’s identity while casting the AKP as an imposter playing into the hands of radical religious terrorists.

It is through the above-mentioned premises that western pundits such as John A. Tures — a political science professor at LaGrange College in Georgia — can boast so easily that extraditing Gülen to Turkey “will lead to more than his imprisonment and/or execution. It will signal the death of America’s Middle East policy, as no moderate Muslim will ever be able to trust the United States to do what’s right.” The most recent dichotomy of “civilised Gülen movement vs. inhuman AKP” following the coup attempt in Turkey is just another discursive strategy that showcases how international politics is whatever western people imagine and make of it.

Turkish charity organization Kimse Yok Mu has signed a landmark agreement with the Philippine government, paving way for close cooperation between the two to further aid, education and development efforts in the two countries.