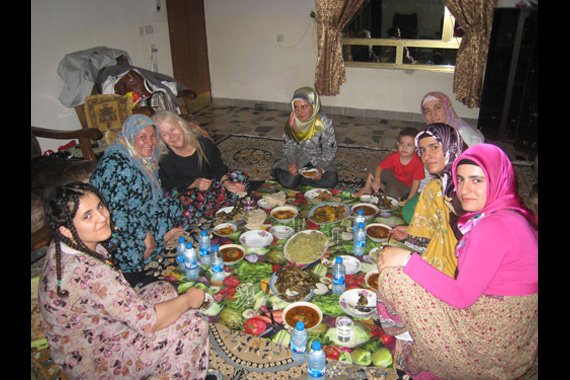 During two recent summer research trips to northern Iraq, Sister Martha Ann Kirk gleaned the perspectives of more than 140 Iraqi girls and women living in this violence-wracked corner of the world.

She took photos and notes, sat in living rooms, broke bread and walked neighborhoods to understand and document their experiences.

Some have lived there for years. Others fled there from more volatile areas of Iraq. They range in age from grandmothers to young girls.

A professor of religious studies at the University of the Incarnate Word, Kirk will show her work Sunday in an exhibit at a local church. She also will participate in a discussion and reception.

Also attending will be her research partner on the project, Sister Patricia Madigan, a nun from Australia.

The display is called “Iraqi Women of Three Generations: Challenges, Education and Hopes for Peace.”

“I have wanted for us to know the humanity of Iraqi families and them to know us at least a little through my visits,” Kirk said. “Ordinary, good people — especially children — suffer from wars.

“How can we develop human relationships that lessen violence in the world?”

Kirk’s research trips were funded by the Gulen Institute at the University of Houston, which is affiliated with the Institute for Interfaith Dialogue.

The organizations are run by Turkish Muslim volunteers — including an active community in San Antonio — who promote the ideals of their movement’s leader, Fethullah Gulen.

The Turkish educator and writer is passionate about interfaith understanding and respect, community service projects and expanding educational access.

Central to Kirk’s goal in the exhibit is to raise the profile of these women’s voices, often repressed by societal and cultural barriers. Yet their experiences are critical to rebuilding communities, she said.

The recurring narrative was one of forgiving and being forgiven and of healing, she said.

The exhibit includes an account from a girl named Pawan.

A fifth-grader at one of the Gulen schools at the time, she spoke of her former math teacher, a man from Turkey.

His father was killed in Iraq some 20 years before. Still, he decided to return to Iraq to teach its children, the exhibit said.

“How could you come to teach and help us? You could have taken revenge on us,” Pawan said in the exhibit. “The teacher started to cry and said, ‘I love you.’ We all started to cry.”