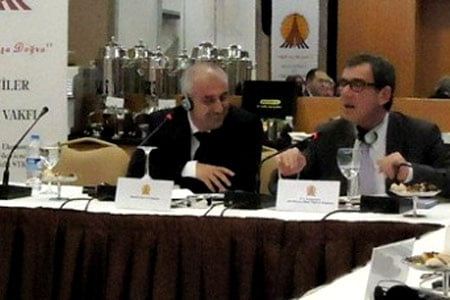 On January 25, 2013, Journalist and Writers Foundation hosted EU-Turkey Delegation Roundtable meeting at Sheraton Hotel, Ankara. In his opening speech, EU Delegation President, Ambassador Jean-Maurice Ripert noted that they have been examining and comparing Turkey’s ambitions with EU criteria set for the accession process.

“Journalists and Writers Foundation is an influential and deep-rooted institution. So, we would like to know the foundation’s thoughts on EU’s criteria for human rights, press freedom, freedom of expression and religion.” Ripert inquired. The delegation sought answers during the meeting that is certain to be instrumental in the country’s diplomatic future.

Later in the meeting, the President of Journalists and Writers Foundation, Mustafa Yesil delivered a speech outlining the core values and principles of Gulen Movement. Yesil recalled that the three major foci of the movement have on education, peace building against existing disunity and poverty alleviation. “The most distinctive feature of the Movement is its advocacy for co-existence. Among its core values are pluralism, dialogue and recognition of democratic opinions, which has naturally resulted in its followers’ conscious avoidance of politics. The Movement cherishes values with scientific, traditional and religious origins.” Yesil said.

Finally, as the foundation’s vice-president Cemal Ussak took the stage, he expressed their hopes for a permanent, an absolute solution to Imrali issue (negotiations over imprisoned PKK leader and relevant Kurdish issue).

Source: [in Turkish] on Medialog Platform, 25 January 2013. English translation is retrieved from HizmentMovement.com

Turkey must avoid targeting individuals simply because they worked for firms affiliated with the Gulen Movement, otherwise it may be challenged in the European Court of Human Rights (ECtHR), the Council of Europe (CoE) Secretary General Thorbjorn Jagland urged.