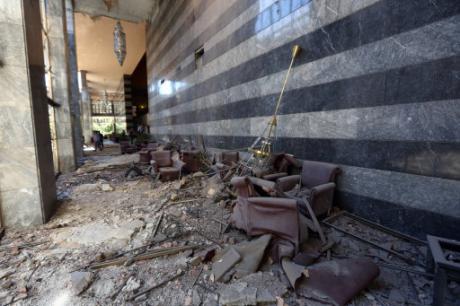 To confirm the news about the military jets over Ankara, I called my parents in Ankara. They answered the phone in a panic. I could hear military jets from the other end of the phone. Not surprisingly, my 86-year-old parents had experienced military coups in Turkey before. As I was talking breathlessly with my Dad, my Mum murmured from the other line calmly but firmly: “this seems like a coup d’état.”

On the day following the Reichstag fire, juridical order was suspended by the Decree of the Reich President for the Protection of People and State (Verordnung des Reichspräsidenten zum Schutz von Volk und Staat). The decree involved the suspension of seven sections of the Constitution which guaranteed individual and civil liberties. The decree authorized the government to take complete control in the federal states

From that point onwards, all hell broke loose especially in Ankara and Istanbul. The death toll in less than 24 hours after the coup attempt in Turkey is over 200. There are thousand of people who are wounded. Twitter and facebook became inaccessible during the early hours. The tv channels started broadcasting live from Ankara and Istanbul: yet, they were not sure what was going on at the outset. Shortly after, the military released a statement saying that the “military has seized all power in Turkey” through the state tv channel TRT. That is when I could not stop my tears, for memories flocked back of the September 12, 1980 coup d’état when a similar announcement was made. I had experienced that coup as a student in one of the most politically active universities in the country, the Middle East Technical University. The memories, as for many people of my generation, were painful.

Last nail in the coffin of critical thought

Within two hours, Turkey’s President Recep Tayyip Erdoğan was live on FaceTime on Turkish  CNN (CNN Türk). His face could be seen on tv screens as it appeared on the phone held in the hand of the CNN Türk anchor. He issued a statement in this manner and urged the people to go to the public squares and the airport and defend the nation. Soon afterwards, there were echoes of calls to prayer from multiple minarets although it was not prayer time. I read later that there were also calls for action by Imams against the military urging people to take to the streets.

Joining the echo of the calls to prayers were the loud noises of military jets flying over Istanbul skies. The combination of these sounds made me think that yes, these were the sounds of the funeral of free speech, critical thinking, and any other remnants of liberal democratic process in Turkey. I realized in fear and agony that whether the coup was successful or not, one thing was certain: there would no longer be room in Turkey for people who can listen, read, analyze, and think critically. With the siren-like echoes of calls to prayer and military jets, Turkey was becoming a land only for true believers.

This did not happen suddenly. With the crackdown on media, academic freedoms, random arrests, and the increasing violence in the southeast provinces, citizens in Turkey have been facing major limitations on their basic freedoms for the past few years. The attempted coup d’état of July 15 is like the last nail in the coffin. Lying dead in the coffin was the courage to use one’s own understanding (as in Sapere Aude) that relentlessly resisted the rising tide of categorical thinking typical of true believers.

Sight of a parliament in ruins

The damage that was inflicted on the parliament building in Ankara was huge. Many of its major halls and corridors are in ruins. The sight was reminiscent of the Reichstag fire in Germany that took place on February 27, 1933, about a month after Adolf Hitler became the Chancellor. The similarities are not limited to the visible damage of both parliament buildings. The Reichstag fire was also a last nail in the coffin of the possibility of basic freedoms as well as critical thinking in Germany. On the evening of the Reichstag fire, Chancellor Hitler was relaxing at a dinner party in Joseph Goebbels’ home. The fire was soon blamed on a demented Dutch Communist named Marinus van der Lubbe who had a record of crimes of arson. The reality behind the Reichstag fire was not even clarified during the Nuremberg trials. Still, there was a lot of evidence that pointed to the responsibility of the Nazis behind it. But what was important was not so much who set fire to the Reichstag but rather what came out of it.

On the day following the Reichstag fire, juridical order was suspended by the Decree of the Reich President for the Protection of People and State (Verordnung des Reichspräsidenten zum Schutz von Volk und Staat). The decree involved the suspension of seven sections of the Constitution which guaranteed individual and civil liberties. The decree authorized the government to take complete control in the federal states and impose the death penalty for a number of crimes. In fact, Goering wanted to hang the arsonist on the spot right after his arrest. Today, I heard one journalist ask the Prime Minister on live television whether they were thinking of bringing back the death penalty in the aftermath of the attempt at a coup d’état. The Prime Minister responded by saying that they will consider every need for extra preventive measures. He also seemed to praise the violent mobs who took to the streets to oppose thecoup d’état.

The Decree following the Reichstag Fire led to emergency measures that created a state of exception. It suspended the personal liberties listed in the Weimar Constitution, including the rights of personal freedom, freedom of opinion, freedom of the press, freedom of organization and assembly, and privacy of communication. The Decree was followed by the Enabling Act (23 March 1933) which enabled the cabinet to enact laws without the participation of the Reichstag. In sum, it led to the consolidation of the Nazi regime (See: Ayşe Kadıoğlu  “Necessity and State of Exception: Turkish State’s Permanent War with its Kurdish Citizens” in Riva Kastoryano (ed), Turkey Between Nationalism and Globalization, Routledge, 2013). There are already signs of the suspension of the juridical order with dozens of members of the Council of State and Court of Cassation taken into custody in less that 24 hours after the coup état attempt.

Fascism: conservatism made popular and plebeian

There is no doubt that we are witnessing the consolidation of a new form of authoritarian regime with a populist streak. I cannot help but remember a quote by Barrington Moore (Social Origins of Dictatorship and Democracy, Beacon Press, Boston, 1966 [1993], p.447): “…fascism is inconceivable without democracy or what is sometimes more turgidly called the entrance of the masses onto the historical stage. Fascism was an attempt to make reaction and conservatism popular and plebeian, through which conservatism, of course, lost the substantial connection it did have with freedom…”.