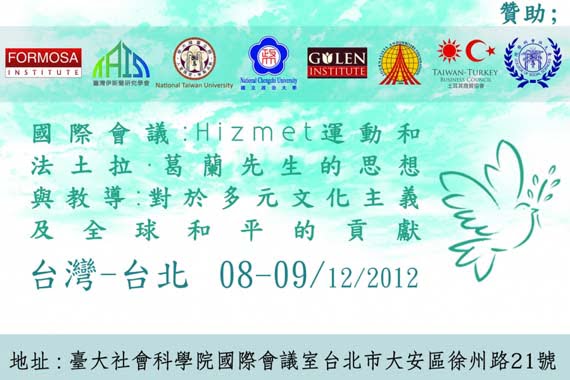 An international conference on the Hizmet Movement (aka Gulen movement), a civic movement inspired by the Turkish Islamic scholar Fethullah Gulen, will be held in Taipei to promote its teachings and practices in Taiwan, organizers said Thursday.

Scholars from Taiwan, Turkey, the United States and Japan will discuss issues ranging from faith-inspired social movements and the structure, development and finance of the movement to Gulen’s contributions to democracy, modern Islamic theology, science, education and charity, said the Taipei-based Formosa Institute, which is co-organizing the event with the Taiwan Association of Islamic Studies.

They will also discuss the philosophy of Hizmet (the Turkish word for “service”), compare Gulen’s philosophy with Confucian thinking, and discuss the movement’s stance on gender issues, the institute said. Similar conferences have been held in countries including the U.S. and Britain, said the institute, an organization inspired by the teachings of Gulen and other intellectual and spiritual leaders.

Gulen, a scholar, educator and author who advocates a moderate brand of Islam, has millions of followers around the world. He is known for making the remark “a terrorist cannot be a Muslim, nor can a true Muslim be a terrorist,” after the Sept. 11 terrorist attacks in the U.S. in 2001.

In July 2008, the 71-year-old Islamic scholar, who now lives in the U.S. state of Pennsylvania, was voted by readers of the U.S.’ Foreign Policy magazine and Britain’s Prospect magazine as the world’s top public intellectual in a poll.

Gulen has inspired the founding of hundreds of schools, hospitals and businesses around the world, including schools in 140 countries. His teachings advocate tolerance, peace and intercultural and interfaith dialogue, as well as mutual understanding among different religious and ethnic groups.

Work done by Gulen followers focus on issues ranging from democracy, multiculturalism and globalization to civil society and intercultural dialogue, the institute said.