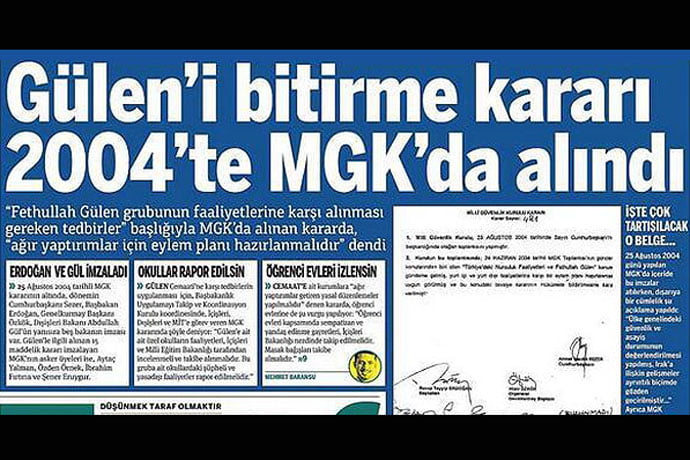 A secret national security document recently discovered by a Turkish daily has revealed that Turkey’s ruling Justice and Development Party (AK Party) government signed up to a planned crackdown on the Hizmet or Gülen movement.

The Taraf daily published a document on Wednesday prepared by the National Security Council (MGK) on Aug. 25, 2004, persuading the government to implement a series of measures to curb the activities of the Gülen movement. It advises the government to adopt legal measures that would impose harsh penalties on Gülen-affiliated institutions.

The document, identified as MGK decision No. 481, asked the government to develop an action plan to pursue the MGK’s recommendations and instructed the Prime Ministry Monitoring Council (BTK) to coordinate the ministries and monitor whether the steps are being implemented.

The MGK decision urges the Foreign Ministry, Interior Ministry and National Intelligence Organization (MİT) to closely monitor and report on the activities of the Gülen movement at home and abroad. It advises the government to instruct the Interior Ministry and Education Ministry to investigate and monitor schools affiliated with the Gülen movement and report their activities to the BTK.

The document states that the government must ensure the financial activity of Gülen-affiliated business people is monitored thorough the Finance Ministry’s Financial Crimes Investigation Board (MASAK). The MGK wants the Education Ministry to investigate Gülen schools as well.

The document also comments on the psychological aspects of an operation against the Gülen movement in terms of defamation tactics.

The MGK is the top state body created by the 1960 military coup. It was seen as a shadow government while the military was in power. Furthermore, it ruled the country directly from 1980 to 1983 before transferring power to the civilian government.

Yet, the military became part of the executive branch through the MGK, joining the president and a committee of ministers. It became the final authority in decisions on a wide range of issues, including law, the economy, education, rights and freedoms. Though its decisions were expressed as advice on paper, they behaved as direct orders to the government.

The main opposition party Republican Peoples’ Party (PKK) leader Kemal Kılıçdaroğlu said the document exposed the double-dealing face of politics the government has been pursuing. He said the government has been contradicting itself with what it has been saying all along, stressing that Prime Minister Erdoğan signed the document but then said completely opposite things to the Turkish people. “The main rule for a politician should be a telling the truth to his/her people. Politician should be after a truth”, he explained.

Yalçın Akdoğan, the AK party deputy and close aide to Erdoğan, admitted that the document is authentic but denied that the government has implemented the MGK decision. “MGK decision of 2004 was considered as null and void, no cabinet decision was taken on that, and no step was taken whatsoever”, he said in a Twitter message.

Turkish Deputy Prime Minister Bülent Arınç also voiced similar remarks, subtly confirming the authenticity of the document but saying that the government has never taken steps to realize what was prescribed to the government against Gülen and his activities.

He said he cannot deny or confirm the report because “he was not then in the meeting.” Arınç yet said he also didn’t feel the necessity to dig into that because the prime minister or other officials may make a statement later today.

Arınç said not a single document endorsed by the MGK was realized in the past ten years and that the government has not done anything against “religious people or groups.” He noted that even if such a decision was taken by the MGK, it was a recommendation to the government and that “government had not realized it.”

“As someone who witnessed that, I can say that this was not implemented,” Arınç added, referring to the document.