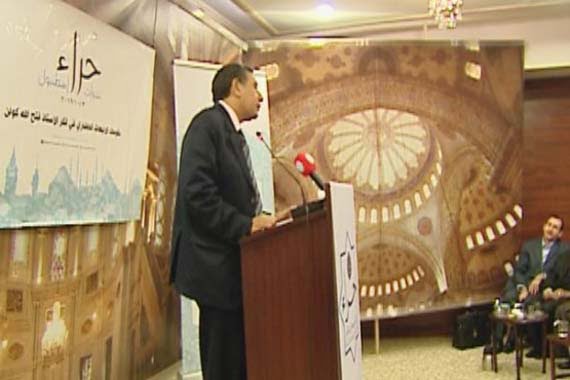 Egypt’s prominent scholars came together at a conference titled “According to Gülen, the Basic Dynamics of the Resurrection” on Thursday in Istanbul. The Egyptian scholars have shared the results of their study on “the horizon of thought” of the scholar Fethullah Gülen.

Nevzat Savaş, the editor-in-chief of Hira magazine, said “We hosted guests from some of the leading universities in Egypt such as Cairo University, Darul Uloom Faculty and Azhar University.”

During the conference, the scholars who have engaged in research of Gülen’s books and thoughts expressed their ideas.

“As far as I have learnt from Fetullah Gulen’s books, followers and the movement, he is a man faithful to Allah.” said Prof. Mohamed Sarkavi from Cairo University. Another scholar, Prof. Abdulhamid Medkur from Cairo University indicated that he saw how love of Islam, human values could be put in people’s hearts and turn these feelings into practice in his books.

“Mr. Gulen is like a disciple of Prophet Mohammed. He represents Islam properly and thoroughly by being inspired directly from Prophet Mohammed.” said Prof. Dr. Fethi Hicasi who is currently working through the book of “the Infinite Ligth” by Fethullah Gulen in which the Prophet Mohammed is told. In addition to this, he also gives lectures from this book at the mosque of Azhar University.

Dr. Mohammed Sayid al Culennid also highlighted the fact that the works of Gulen should be read with utmost attention. Saying that Fethullah Gulen is one of the rare people on earth in terms of opinion and establishing a new civilization, Dr. Culenid stated that the development project of Mr. Gulen is a huge project. In order to make the project come true Fethullah Gulen must be read and studied carefully.