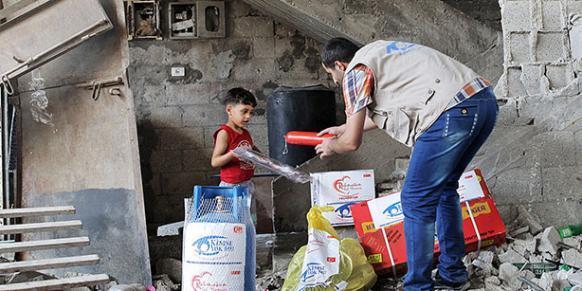 Kimse Yok Mu, which distributes aid across the world, holds UN Economic and Social Council consultative status and carries out programs with the UNHCR.(Photo: Today's Zaman)

The GYV said in a statement released on Saturday that the fact that the case consists of legal inconsistencies and that the claims are groundless show that the case is not legal but aims to intimidate and limit the activities of civil society group and “bring it into line.”

The statement recalled that the charity is active in 113 countries with more than 3 million donors, reaches 4.5 million needy people across the world and was named one of the world’s best NGOs by Swiss non-profit group Global_Geneva.

“We are having difficulty in understanding what kind of a benefit the government can obtain by putting pressure on Kimse Yok Mu, which carries out its projects for years transparently and effectively by bringing so many needy and volunteers in our country and the world,” the statement continued.
The GYV, whose honorary president is Turkish Islamic scholar Fethullah Gülen, also called on the government to abandon this and similar legal cases which do not comply with the law, democracy and the human rights and which aims to render civil society ineffective.
“It should not be forgotten that everyone needs law,” it added.

Kimse Yok Mu, which is affiliated with the Gülen movement, also known as the Hizmet movement and inspired by the teachings of Gülen, has become a target in a battle launched by the Justice and Development Party (AK Party) government against the movement. Several pro-government media outlets are carrying out a smear campaign, with publications accusing the charity of engaging in illegal fundraising activities despite a lack of evidence to that effect.