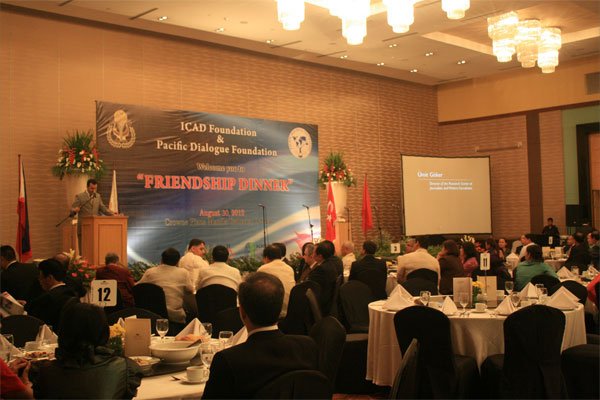 Heads of different government and private offices, presidents and academicians from various universities, representatives of different religious organizations, executives and chairman of several business organizations and other sectors were present also in this event. The event was indeed a success.

Mr. Ferhat Kazkondu, the President of Pacific Dialogue Foundation, Inc. gave the opening remarks in the program. After welcoming and thanking the guests, he said “it is wonderful to see all friends here, from different offices and from different backgrounds. He also emphasized “that representing the goodness is more important and more meaningful than just talking about it.” He concluded his remarks by saying that “tonight in this Friendship Dinner, we strongly believe that friendship, co-existence and harmony are already being represented”.

After Mr. Ferhat Kazkondu, the keynote speaker Mr. Umit Goker from Turkey delivered a speech that emphasized certain quotes and messages from Turkish scholar Fethullah Gulen. Among others, he highlighted the importance of values on caring and compassion, sincerity and modesty in the heart. He ended his message with another saying from Fethullah Gulen which stated that “love is the most direct and safest way to human perfection. It is difficult to attain the rank of human perfection through ways that do not contain love.”

Congresswoman Aliah Dimaporo gave also a short message in the program that describes her first encounter with Turkish people and her admiration for Turkey as a country, which she has visited last year. Indeed, the values and experiences that she had treasured from her educational and cultural trip to Turkey have helped her conceptualized a cause which she applied in her province. She completed her message with a Turkish proverb “if there is life, there is hope”.

Senator Teofisto Guingona served as the last speaker in the program. His message focused in the importance of dialogue not only in the Philippines but also in other parts of the world.

The Pacific Dialogue Foundation, in partnership with other foundations will continue to further realize its goal. It will remain steadfast in its effort to reach-out to other sectors to advance and widen its horizon to stay relevant and true to its mission of promoting a world of peace in which people of diverse culture, religions, race, backgrounds or beliefs can freely pursue their lives in the interest of the common good through dialogue, by upholding the primacy of universal values such as tolerance, understanding, compassion, mutual respect, and fairness for peaceful co-existence.

Alam said people should donate to Turkish schools inasmuch as they can afford. “Little or more, everyone should give support to these schools. As a sign of this, I promise to donate $5,500 to these schools every year,”