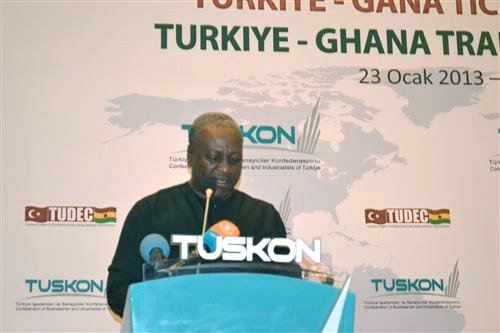 Economy Minister Zafer Çağlayan said on Wednesday at a forum organized by TUSKON that the government is gearing up to increase the mutual trade volume with Ghana from $550 million in 2012 to $1 billion in the next two years.

Speaking to participants at the Turkey-Ghana Trade and Investment Forum organized by the Turkish Confederation of Businessmen and Industrialists (TUSKON) in İstanbul, Çağlayan noted that at the request of Prime Minister Recep Tayyip Erdoğan, Turkey’s state-owned export credit agency, Eximbank, will now be giving loans to investors in Ghana. He also announced that agreements regarding the double taxation on traded goods and protection of investments will begin to be enforced in the near future.

Referring to the fact that 2013 has been selected as the “year of Africa” by the Turkish government and that the relations between Africa and Turkey have improved tremendously in the past decade, the minister stated that the trade volume between Turkey and the continent was $3 billion 10 years ago, which increased to $30 billion in 2012. “For example, Turkish constructors have invested a total of $245 billion in the past 10 years, and $45 billion of it was in Africa,” he added.

Furthermore, he stated that 80 Turkish firms operating in Ghana have made investments totaling $60 million and urged Turkish businessmen to take advantage of the loans Eximbank provides for opportunities mainly in the energy and infrastructure fields, as well as agriculture and construction. “Also, we will continue to take part in social projects to contribute to improving the fields of health and education.”

Addressing the participants, Ghana President John Dramani Mahama reassured prospective investors by saying, “Peace and stability is the biggest asset of Ghana.” He then called on businessmen to invest in Ghana by expressing that the country’s second largest asset is its human resources. He stated, “Ghana provides a comparative advantage in energy production,” while explaining that the country aims to produce electricity with the partnership of Turkish businessmen for the whole of Africa, which has market value of $700 billion

Mahama stated that the country has opened a new chapter in its relations with the world in line with global economic developments and said Turkey has become a prominent country when it comes to economic relations. “Ghana has an increasingly skilled workforce, rich mines and great potential for petroleum production. Also, it is one of the most important gold producers with an annual production of 80 tons,” he commented, adding that they also plan on improving the capacity of country’s ports and airports.

Meanwhile, during his speech, TUSKON President Rızanur Meral pointed out that Ghana is the fastest growing country in Western Africa, while emphasizing that the country has a need of 1.5 million homes and hoping for investments in infrastructure, telecommunications, energy and agriculture.

Ünal Tanık TUSKON is one of the most recognized business associations of the last decade. Its initiatives are believed to play a critical role in reducing the impacts of global economic crisis following 2008 that severely struck European Union and the US, and in Turkey’s expansion in Africa. TUSKON President Rizanur Meral revealed that they […]

The Turkish charity Kimse Yok Mu (Is Anybody There) has been providing aid to 3,000 families in the African country of Guinea during the holy month of Ramadan and has also been organizing iftars (fast-breaking dinners) in various parts of the country each evening. A large iftar event was organized by the Kimse Yok Mu […]

Turkish President Recep Tayyip Erdoğan visited a few African nations, among them Somalia and Ethiopia. When looking at his media mouthpieces’ coverage of the trip and his declarations, it seems the primary reason of his trip was to “tell” the African nations to close schools that were established by civil society groups and private companies affiliated with the Hizmet movement.

HAKAN TAŞÇI Over the last six years, the Turkish Confederation of Businessmen and Industrialists (TUSKON) has introduced a new concept to trade fair organizations: World Trade Bridges. These programs have evolved over time and become internationally recognized trade events in Turkey. International companies receive invitations to these programs, come to Turkey and — with the […]