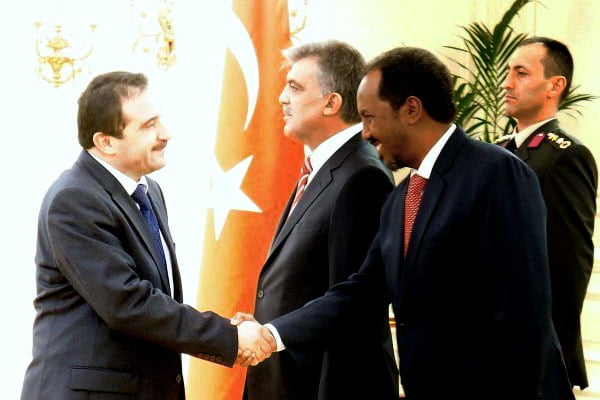 A group of Somali students brought to Turkey for their education by the charitable foundation Kimse Yok Mu have told Somali President Hassan Sheikh Mohamud, who arrived in Turkey in his first overseas trip after being elected, that Turkey feels like home.

Somali students from Ankara’s private Samanyolu Serhat school visited the Somali president at the hotel he has been staying in the capitol of Ankara, where he arrived as the guest of President Abdullah Gül on Tuesday.

One of the students, Abdulmacit Hassan Wehlie, told the Somali president that he and his friends are receiving quality education in Turkey and thanked Kimse Yok Mu for giving them such an opportunity. He said they feel like home in Turkey thanks to the charitable foundation.

After the words of the student, President Sheikh Mohamud thanked Kimse Yok Mu as well. Speaking during the visit, Kimse Yok Mu Chairman Ünal Öztürk said the organization will continue devoted efforts to extend a helping hand to the people of Somalia and added that Kimse Yok Mu is working so that Somali students will grow up into responsible adults.

Kimse Yok Mu brought a total of 607 Somali students to Turkey last academic year. Their education expenses are met by the organization. They study in different provinces across the nation.

Meanwhile, a dinner event was also held by Gül in honor of the Somali president. Gül said at the event that the Turkish people stand by Somali with all their means. Mohamud noted that the visit represents that Somali is leaving hard times behind and a new, more representative state is being born. “Somali people and their intellectuals and politicians look after their country and have begun to build a future with hope and excitement,” he said.

Gül recalled that the history of Turkey-Somalia relations dates back to the 16th century, during which the kinship of the two nations has strengthened.

Mohamud stated that Somali feels the presence of Turkey with them and they are happy with the support of the Turks for the future of their country.