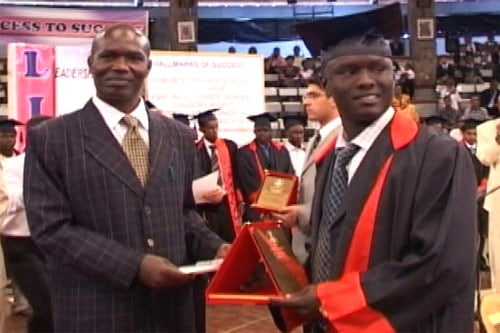 (Ebru News/AP) While Turkish schools around the world are praised by many, 10th year graduates are enjoying their diplomas in Africa where Turkiye has launched a new diplomacy inniative. Isik College located in the capital of Kenya that started educating in 1998 and achieved the most important accomplishments in the country.

At 2007 Kenya university entrance exam Isik College outran many schools of which many of whom date back some 50 years. Isik College placed 10th among four thousand high schools and a 13th among more than a thousand private schools. There was excitement and enthusiasm at the ceremony of it’s 10th year anniversary in Kenya.

After the national anthems of Kenya and Turkiye, the school band played marvelous pieces, receiving a standing ovation from the audience.

Social activities of the school were on display by way of a slide show. Also a short movie which was prepared for the promotion of the school was shown ending with a surprise that brought the audience to laughter.

A Gymnastics show from the ceremony, Poems in Turkish Songs in Turkish and Kenyan and stage plays all made for a memorable event.

At the ceremony, Education Director of the State Mubarak Tahir and the representative of the Education Minister Agan Patrik praised the Turkish schools underlining their successes in Kenya. They also said Turkish schools have made enormous contributions to the bilateral relations of the two countries.

The new graduates were very happy when they received their diplomas.

The speeches delivered by the successful students of the school moved everyone.

The success of Isik Colleges with 5 schools and 1200 students around Kenya is increasing day after day. It is evident from the ceremonies that Turkish schools have contributed much to the education system of the country.