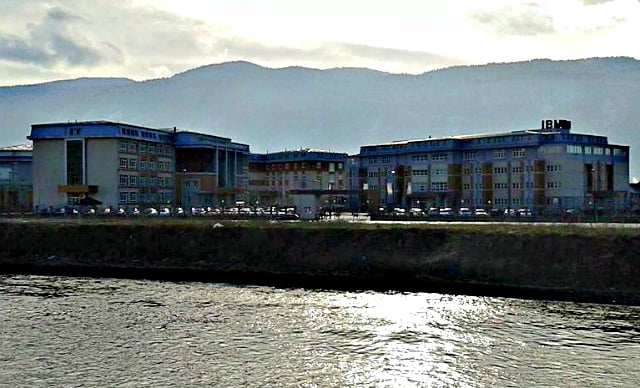 The International Burch University seen from across the river. Photo: Munja and Alen Huskic/Wikimedia.

In the Sarajevo suburb of Ilidza, university students stream to and from the tram station via a path leading over the river to two gated compounds.

The first is a huge development whose buildings are finished elegantly in Turkish style. Founded in 2005, the new campus of the private International University of Sarajevo was opened by Turkish president Recep Tayyip Erdogan himself.

The other lies next door. Its buildings are smaller, more unassuming, and swathes of the site are taken up with construction work.

This is the International Burch University, one of 15 private educational institutions in Bosnia run by an organization called Bosna Sema, and it is a lot less favoured by the Erdogan regime.

Exams began on Monday, but some Burch students have been left worrying about more than just their grades since Bosna Sema this summer became a focus of the spat between the Turkish state and its perceived foes.

Dalibor Djumic, who studies electrical and electronics engineering, told BIRN that recent developments in Turkey since the failed coup there in July had left parents concerned and students feeling the heat.

“Students are stressed out and sad because [although the] media says one thing their eyes say something else,” he said, adding that if pressure continued, Burch students feared encountering discrimination when they seek jobs.

When Burch was established back in 2008, the power struggle between Erdogan and an exiled Muslim cleric called Fetullah Gulen had not yet gained the momentum it has today.

But since the failed coup in on July 15, Turkish authorities have repeatedly blamed Gulen for masterminding it – an accusation he denies.

Since July, the authorities have reportedly arrested 36,000 people, and more than 110,000 people have been sacked from jobs in the military, the civil service, the judiciary, education and the media.

They would also like to extend the crackdown abroad to the worldwide networks of educational institutions linked to Gulen, who now lives in exile in the US.

As part of this, the Turkish authorities have alleged that the Bosna Sema organisation is linked to Gulen and to terrorism.

In July, the Turkish ambassador to Bosnia Cihad Erginay, called on Turkey’s allies to take measures against all Gulen supporters in their countries.

“We expect governments from all over the world to fight against this terrorist organisation because we have seen that … they infiltrate state institutions,” Erginay said.

Although he did not mention the chain of schools by name, the organisation has been targeted by local politicians who follow the Ankara line.

Some members of the main Bosniak party, the Party of Democratic Action, SDA, which has close ties with Erdogan, have argued for the closure of the schools.

“We don’t need these schools, we have our own system,” Salmir Kaplan, a SDA member of the Parliament of the Federation of Bosnia and Herzegovina, one of Bosnia’s two entities, told Turkish news agency Anadolu, also in July.

In early November, Bosnian Foreign Minister Igor Crnadak was quoted in the Turkish media as saying that the Bosnian authorities were monitoring the institutions and warning parents not to send their children to them.

The deputy mayor of the city, Abdullah Skaka, justified the decision by saying that it was important to preserve good relations with Turkey.

However, Vibor Handzic, head of the smaller Nasa Stranka party in the Sarajevo municipality of Stari Grad, said the reprisal undermined the statehood of Bosnia and Herzegovina.

On the Sarajevo-based website Klix.ba, he said that Lafciogluu – whose students have gone onto prestigious universities such as MIT and Brown – was stripped of the award simply because of pressure from Turkey.

“We must not accept the logic by which Erdogan’s regime can be both prosecutor and judge and may persecute people [in Bosnia] with no evidence,” Handzic said.

Bosna Sema concedes that Gulen’s ideas inspired its founders but dismisses claims that it is linked to terrorism or to the failed coup.

It points out that less than 20 per cent of its academic staff are Turkish and that it is a financially and legally independent body.

The managing director of Bosna Sema, Sabahudin Dzemic, told BIRN: “It might be that some of the people here sympathize with Gulen, or with somebody else – I don’t know. I read some of his books. I liked what I read, but it doesn’t make me a terrorist.”

The media outlet Al Jazeera has reported that enrollments at Burch were a little down this year, and Dzemic told BIRN that a handful of students had indeed quit the schools since the coup.

“Some of the parents who took their children from our schools said that they were under pressure,” he said, admitting that he could not prove this last point.

In what appeared like a move to alleviate the pressure and create a distance with Gulen, the management of Bosna Sema sought to endow the organization with Bosnia’s official Islamic Community in August.

Burch Rector Teoman Duman told the media he now hoped that “international factors and speculation would not have any [more] impact on the functioning of the institutions”.

However, Dzemic said the affiliation move fell through, blaming the organization’s debt, which he said prevented the Islamic Community from accepting it.

On November 10, Bosna Sema announced that it had a new American owner, US Global Invest LLC.

It had begun the process to obtain accreditation in US and establish double degree arrangements, according to Professor Samuel Henry, advisor to US Global Invest LLC, the press release said.

The news came as a comfort to some, including genetics student Layla Abdel-Ilah. “It is solved,” she told BIRN. “No political problems with the Turkish government now.”

However, Dzemic sounded vague about the new investor. “As far as I know, there are some businessmen – and if you ask me about their origin or any other details I cannot tell you anything about that,” he said. “They have plans to make the institutions work better … They are now making some investments.”

Professor Henry, meanwhile, from Portland State University, promised to discuss the topic with BIRN but said: “We are still working on some details.”

Parents and teachers told BIRN of mixed feelings about the storm that has enveloped the Bosna Sema schools.

Dajana Radic, whose daughter attended Bosna Sema’s International High School in Sarajevo, lamented the pressures on the schools and students.

“My experiences with the school were excellent. All of my friends who were in a dilemma [about sending their children there], I helped decide,” she said.

“But what can we do? Nothing,” she said. She added that she suspected her daughter had lost out on Turkish university scholarships because of official antipathy in Turkey towards Bosna Sema.

But a teacher at the International High School, who asked not to be named, told BIRN that she was not overly concerned.

Some teachers were leaving, she said, but for personal reasons rather than because of pressure – and people were mostly keeping their heads down.

Asked about the city council’s withdrawal of Lafciogluu’s award, he said: “Our conscience is clear and clean. I don’t think that we lost anything. They lost. Whoever did that, they lost. So we are moral winners, I think. Our teacher and our institutions.”

The students and teachers, who represented Austria in 11th Turkish Language Olympiads organized by International Turkish Language Education Association (TURKCEDER) were received by the Austrian President Heinz Fischer at the presidential palace. The olympiad team briefed the president on the language and culture event, during their visit. Fischer congratulated the team for receiving two medals in the event.