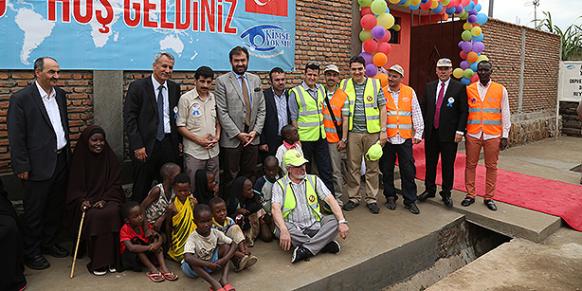 Thanks to donations by Turkish philanthropists, the Turkish charity has been able to open the Kiyange Gülenyüz Girls’ Orphanage and the Buyenzi Ahmet Akyol Boys’ Orphanage, which were built at the cost of TL 374,000. Speaking at the opening ceremony of the orphanages, Burundian Vice President Prosper Bazombanza said that Kimse Yok Mu had given hope to these orphans, adding, “I see that the charity volunteers consider these children like their own children — a situation that makes me very happy.”

Mehmet Bozdağ, an official from Kimse Yok Mu, said that the orphanages will be a turning point in these children’s lives and that “it is our task to attach importance to the problems of orphaned children all over the world.”

However, the charity had its right to collect charitable donations in Turkey abruptly rescinded last year in what seems to be an arbitrary decision made during a Cabinet meeting. Kimse Yok Mu is the only aid organization in Turkey that holds UN Economic and Social Council (ECOSOC) special consultative status and it began to develop internationally recognized relief programs in partnership with the United Nations Human Rights Council (UNHRC) in 2013. It was also awarded the Turkish Grand National Assembly Outstanding Service Award in 2013, under the ruling Justice and Development Party (AK Party).

However, a campaign to smear the organization was launched after the Dec. 17, 2013 government corruption investigation of leading AK Party figures became public. President Recep Tayyip Erdoğan, who was previously prime minister and AK Party chairman, has targeted Kimse Yok Mu, which is affliated with the Hizmet movement due to an apparent government grudge against the grassroots Hizmet movement which it holds responsible for the corruption investigation.