Indialogue Foundation director Osman Kayaoglu talks about the places to see in Turkey as he holds a traditional Turkish vase. Photo: Nagara Gopal

As the Turkish Consulate gets ready to set up office in Hyderabad, Neeraja Murthy finds a Turkey-Hyderabad connect.

Enter the first floor of Learnium School on Road No. 44, Jubilee Hills and you’ll find a slice of Turkey in Hyderabad. On the walls is a Turkish Corner that displays photographs of ‘Turk folklor’, a Turkish bride, ‘Turk Lokumu’ among other things. Move around and there is a Indo-Turk Corner and photographs of famous Turkish palaces. As we soak in the pictures, we hear the booming voice of Sevim Kayaogolu calling out “Bir, iki, uch, dort… “(one, two, three four… in Turkish). She is teaching a Turkish dance to a group of young girls who are dancing to the beats of Yeni bir dunya, dressed in their traditional Turkish dresses.

“The students are presenting this Turkish dance for the Parents Day meeting,” informs Sevim. The school (will be called Iqbalia International School) run by a Trust (which also includes Turkish people) teaches Turkish language art, dance and culture to its students, in addition to its regular CBSE syllabus. Osman Kayaogolu, director of Indialogue Foundation’s second year in Hyderabad, calls the city ‘historical’. “Among the different cities in India, Hyderabad has a beautiful history,” he says and adds, “Turkey and Hyderabad share a lot in common in culture. We have given our daughters here in marriage – Princess Durru Shehvar who married Azam Jah, Princesses Esin and Esra have also come to Hyderabad after marriage.” 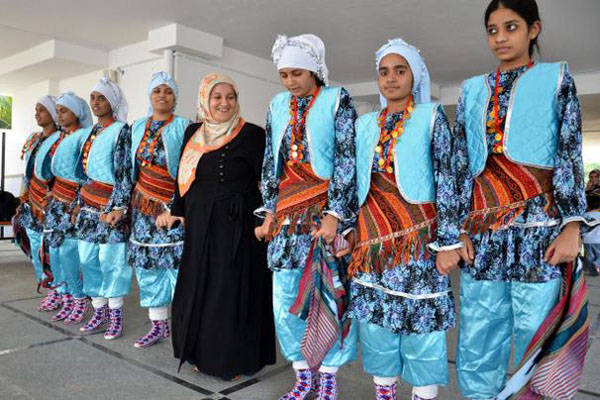 Sevim (in the centre) joins a group of girls dancing to the tune of Turkish song ‘Yeni bir dunya’. Photo: Nagara Gopal

Osman talks about the ‘royal’ similarity between the two regions. “The Chowmahalla Palace looks like a replica of Dolmabahche palace, only the former is smaller. It is said that the Chowmahalla was built for Durru Shehvar so that she would feel at home in a place that reminds her of Turkey,” he smiles.

Indialogue Foundation, the Turkish cultural centre acts as a hub for the 15 Turkish families living in Hyderabad. “We get together here during religious ceremonies like Eid and we organise inter-faith seminars, talks, conferences and cultural programmes. We arrange business meetings between Turkish and Indian businessmen and also organise Turkish celebrations.”

Osman says the Turks enjoy their stay in the city. “The climate is nice and we enjoy eating biryani which is like our not-so-spicy Osmani pulao. We have made many friends here and people are affectionate too.”

What baffles Osman however is the way friendly Hyderabadis behave while driving on roads. “During busy traffic, they are not at all friendly and act differently,” he says with a smile. The Turkish women volunteers try to spread their art and culture in the city. Osman and his group of friends also play football every Sunday. “We don’t know about cricket, but now our children are picking up the game in Hyderabad.”

Osman says Turkish people in the city do miss their family and friends back home as well as Turkish food; but they have found a home away from home here.

“Hyderabad is our second home. Merhaba Hydarabad (Salaam Hyderabad),” he signs off.

Indialogue Foundation and Sarojini Naidu School of Arts and Communication, University of Hyderabad had organised a Indialogue Short Film Contest 2013on the theme ‘Peaceful Coexistence” which aimed to foster universally shared values among public .

The contest had two categories – YouTube award and Jury award. Emrah Alpaslan from Saritha Vidya Niketan with his short film titled Dedicated Life won the YouTube award with 2100+ views. Jhilam Chattaraj, from University of Hyderabad with her movie In Search of History was selected for the Jury award.