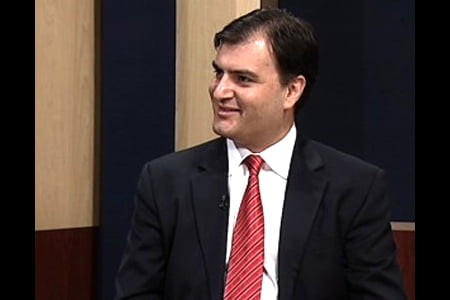 International companies receive invitations to these programs, come to Turkey and — with the support of thousand of interpreters — meet with Turkish companies and seek ways to do business together at thousands of tables. The 25th of the Trade Bridges, which convened this past week in İstanbul, hosted more than 1,500 international companies from 130 countries together with 1,200 Turkish companies. More than 200 companies were represented at booths in this unique program.

This World Trade Bridge — focusing on construction, construction materials, home textiles, and furniture — became the hub for billions of dollars of international trade. Journalists were present at the program and individual deals struck were covered extensively in the media. For instance, President Abdullah Gül’s scholarship negotiation with TUSKON President Rızanur Meral and Economy Minister Zafer Çağlayan at the gala dinner made headlines the next day. As part of their bargain, 25 young Africans will get scholarships to get their college degrees in Turkey. But a broader perspective on the convention can also shed some light on how Turkish trade is evolving.

This program often shows the emerging trends in Turkish interest in the world and the priority countries for Turkey. Countries in the regions of the Balkans, Central Asia and the Middle East usually show a strong presence in these programs and often sign lucrative deals with Turkish companies. This year, Nigeria turns out to be the champion of participation with more than 70 companies, and Brazil comes in second with 55 companies.

Nigeria and Brazil, emerging powers of Africa and Latin America, are key players in their own regions and if Turkey can find ways to work with these countries closely, Turkey will successfully diversify its trade portfolio and shake off dependency on European trade without sacrificing its competitive edge in traditional markets. This will help Turkey deepen its ties with those regions as well. The participants list announced by TUSKON on its website already gives strong signals of these new partnerships.

India, Egypt and Kazakhstan are also strategic destinations for Turkish exports, along with investments in the Middle East, North Africa and Asia. Kosovo, Tanzania, France, Germany, the Philippines, Congo, Sudan, Russia, Turkmenistan and Uganda all had a strong presence and prove that Turkey’s focus on particular regions in trade and investment is crucial for achieving its trade targets. European strongholds like Germany and France are still important for Turkey but emerging economies in Africa, Latin America, the Balkans and Central Asia still the critical places Turkey should look at. The US once again showed its lack of relevance for the Turkish market with a mere 13-company delegation who are still focusing on limited trade areas like marble, granite and textiles.

Strategic partnerships in construction and investment in the construction materials sector top the agenda for Latin American and African markets. The Nigerian delegation came with tens of projects and the Brazilian Chamber of Commerce came with their leadership and searched for local know-how and technology-based infrastructure companies to work with.

Turkish companies are typically very strong in the region but they rarely push the boundaries to penetrate the Latin American and African markets. This seems to be changing and the latest World Trade Bridge gave the early signs of this transformation.

Charley Honey | The Grand Rapids Press | Saturday, July 30, 2011 The meal was incredible: savory lentil soup, two kinds of bread and salad, stuffed peppers, a scrumptious chicken casserole and a tasty pudding called muhallebi, followed by black tea in dainty glass cups. When you eat like this, you know you’re in Turkey. […]