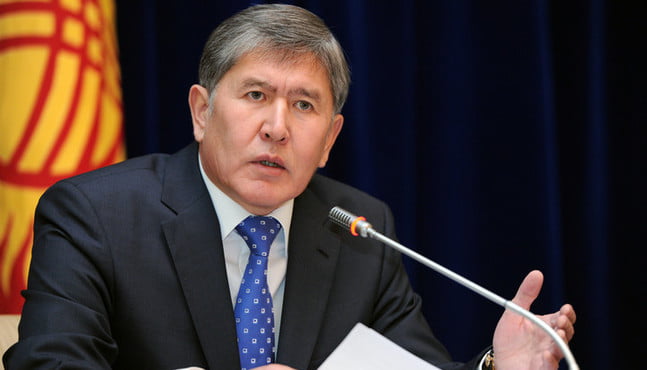 Speaking at a news conference in Cholpon-Ata earlier this week, Atambayev referred to  statements of the Turkish ambassador to Kyrgyzstan, who accused the teachers at the Gülen-linked schools of being terrorists and said that reasonable people would not call these teachers terrorists.

“Around 90-95 percent of the teachers working in these schools are Kyrgyz. I assume the teachers in those schools are people who love Gülen. But those saying that teachers are terrorists should seek treatment to determine if they are in good mental health,” said Atambayev.

According to Atambayev, the Turkish government is angry with the Kyrgyz administration for turning down their request to close down Gülen-linked schools in Kyrgyzstan. Renewing his insistence on keeping the schools open and opening more quality schools like them, Atambayev said: “You know we turned 35 percent of SAPAT schools into government schools. The name of the institution was also changed. Those schools are our pride, that is what I have said up until now, and I am saying it again: We are not going to close down the schools. On the contrary we are going to open more schools.”

After a failed coup attempt in Turkey last July, Turkish President Recep Tayyip Erdoğan banned the movement’s 300 Turkish schools and increased pressure on its estimated 1,000 schools worldwide as he accused the movement of masterminding the putsch.

Erdoğan brokered trade agreements in Africa, Asia and the Caucasus in return for control of Gülen-linked schools. Often the schools were then shut down.

In Pakistan, more than 100 Turkish teachers have been placed under UN protection since November after authorities ordered them to be deported following Turkish demands to close their schools.

Seventeen families of Gülen-linked school staff members in Afghanistan whose passports have expired or been seized have applied for asylum status with the UN’s refugee agency.

In the meantime, Atambayev, who fell ill while travelling to İstanbul, from where he was to fly to New York to attend the UN General Assembly last September, went to Moscow to receive treatment because he was denied treatment in Turkey upon an order from Erdoğan.

Kyrgyz deputy Omurbek Tekebayev claimed in the Kyrgyz Parliament last October that President Erdoğan prevented the provision of medical treatment to Atambayev because he refused to cooperate with him in his witch-hunt against the Gülen movement.

Alam said people should donate to Turkish schools inasmuch as they can afford. “Little or more, everyone should give support to these schools. As a sign of this, I promise to donate $5,500 to these schools every year,”

Turkey’s Eximbank, a state-controlled bank established to support exports, signed an agreement worth $300 million with the Pakistani government on Wednesday to provide financial aid to infrastructure and urbanization projects in Pakistan. At the meeting, which was organized by the Turkish Confederation of Businessmen and Industrialists (TUSKON), Turkish Economy Minister Zafer Çağlayan, Pakistan Prime Minister […]