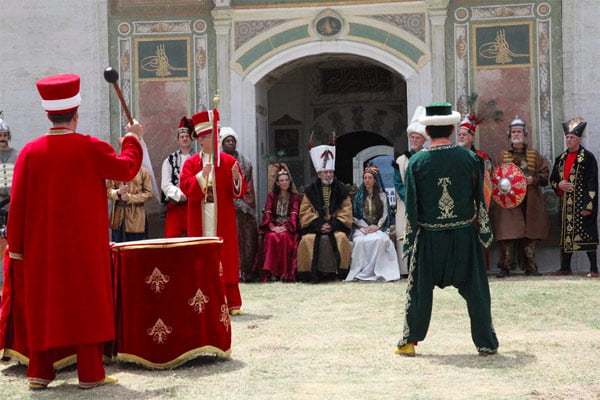 The four-day Anatolian Cultures and Food Festival, the largest Turkish festival in the world, is introducing Americans to Turkey and Anatolian civilizations while promoting Turkey’s diverse cultural communities on its third day.

The festival, held at the Orange County Fair & Event Center, will end on Sunday. Preparations for the fourth edition of the festival began months ago, and more than 400 people, including Turks, Armenians and Americans, have volunteered to help out. The slogan of the festival is “Discovering Turkey.”

Visitors to the festival have the opportunity to wander around many shops and promotional stalls set up in the large arena, where they are able to buy plenty of traditional Turkish goods and taste Turkish food. More than 100 types of Turkish food, including mantı (dumplings filled with meat), kebab, sarma (a savory dish of grape, cabbage or chard leaves rolled around a filling usually based on minced meat), simit (circular bread covered in sesame seeds), malleable ice cream known as Maraş and Turkish coffee are being offered at the event.

Visitors have the opportunity to take a photo with Sultan Kösen, the world’s tallest man, who stands 8’3″ tall. Kösen, wearing Ottoman period clothing, tours the festival area throughout the event.

A mehter (Ottoman janissary band), a sema (whirling dervish) group and a group of traditional dancers are also performing at the festival. Also in another section, a man reads the Quran throughout the event.

Schools in the area have also organized tours to the festival. A section of the fair has been set aside for children’s activities and includes a children’s theater, where shows are put on featuring characters such as Nasreddin Hodja, Keloğlan and the shadow puppets Karagöz and Hacivat.

The visitors enter the festival area through a road called “The Road of Civilizations,” where there are several gates symbolizing the Kingdom of Lydia, the empire of the Hittites, the Persian Empire, the Roman Empire, the Byzantine Empire, Selçuk dynasty, the Ottoman Empire and finally the Republic of Turkey. There are information boards beside the gates giving information about the cultures and history of each empire, kingdom, dynasty or republic.