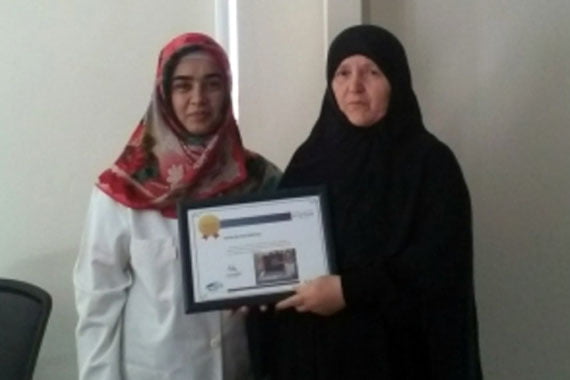 A philanthropist woman from Kocaeli (a province in northwest Turkey), Siyade Yilmaz, has financed a water well, in memory of her father, at the service of 10 thousand in Daraban town of Tehsil Kulachi in Dera Ismail Khan District in Pakistan.

In her statements, Yilmaz said they had been previously able to go to hajj (Muslim pilgrimage) as whole family with the money she made out of her cattle’s milk. “Then I heard of and was inspired by the water well campaign by Kimse Yok Mu Kocaeli chapter where my daughter is a volunteer. I saved the money I made out of milking and decided to get one established in memory of my father. I would like to thank the foundation for making such a benevolence possible,” Yilmaz further said. She was presented a certificate of appreciation by Kimse Yok Mu Kocaeli public relations official Nurcan Bayraktar.

Kimse Yok Mu, which has established water wells to provide clean water to those in underdeveloped countries such as Burkina Faso, Chad, Cameroon, Senegal, Somalia and Sudan, has a track record of 502 water wells in these countries and many more deprived of clean water due to various factors including draught, poor infrastructure and civil war.

Through the KYM campaign, the locals in such dry regions are not only able to access clean water but also secured against epidemics resulting from unhealthy water. The campaign aims to enrich the land and boost solidarity and sharing among locals. The water wells are put into service after a 3-6 month labor and quality tests.