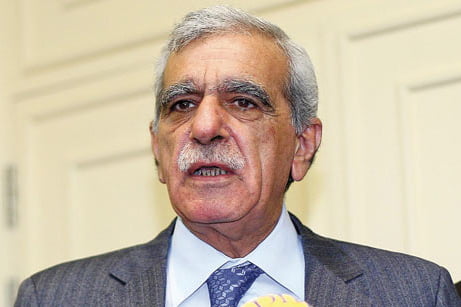 Pro-Kurdish Peace and Democracy Party (BDP) deputy Ahmet Türk has welcomed support of Turkish Islamic scholar Fethullah Gülen for the peace talks between the jailed leader of the Kurdistan Workers’ Party (PKK) and the government. “View of Fethullah Gülen [on peace talks] is reasonable, welcoming,” Türk told CNN Türk TV channel in an interview on Wednesday, adding that he carefully followed his statement.

In his latest weekly speech, broadcast on website Herkul.org last Sunday, Gülen said as long as national dignity and pride are not undermined, every necessary step should be taken to maintain peace because “there are benefits in peace.”

Türk, who also visited Öcalan last week as part of the peace talks, said in the interview that Gülen was stressing the fact that “we should accept who we are” and lauded his messages of tolerance in his speech. He said he found his remarks “positive.”

State officials and Öcalan have been having talks to broker a deal for the disarming of the terrorist group. The talks with Öcalan are being carried out by National Intelligence Organization (MİT) head Hakan Fidan, whose position as a negotiator on behalf of the Turkish state has been confirmed by the government.

The PKK, listed as a terrorist organization by Turkey and much of the international community, has waged a bloody campaign for self-rule in predominantly Kurdish-populated southeastern Anatolia since 1984. More than 40,000 people, including civilians and security forces, have been killed in clashes with the terrorist group.

Öcalan, imprisoned on İmralı Island in the Marmara Sea south of İstanbul since his capture in 1999, has significant influence among PKK members and supporters. The Turkish state believes talks with the terrorist head may lead to a timetable for withdrawal of PKK terrorists from Turkey and the eventual laying down of arms.

There is support for the peace talks from many circles in society including the main opposition Republican People’s Party (CHP) and Turkey’s mainstream media.

In the interview, Türk also said its Öcalan who is holding the key to the solution of the Kurdish issue rather than his party, which is largely viewed as a political offshoot of the terrorist organization by the authorities.

Amid debates that Öcalan might be not influential enough in calling the shots during peace talks between him and the state officials, Türk’s position was assuring: İmralı’s position has the capability to realize the solution. The Kurdish deputy was referring to the island of İmralı, where Öcalan has been jailed since 1999.

Türk also recalled that his party members were criticized when they pointed to Öcalan as the chief actor who should be heeded as a party in peace talks. “Abdullah Öcalan is the one who is deciding. We are not decision-makers,” Türk stressed.

Türk also said he is in favor of open talks and that secret talks would not yield healthy results.

Speaking about investigation into the Kurdistan Communities’ Union (KCK), an urban branch of the PKK, Türk said authorities have rounded up nearly 10,000 civilians, most of whom are not related to the KCK. He said Öcalan also raised similar concerns during their talks.

In Niger’s capital Niamey, Turkish Prime Minister Recep Tayyip Erdoğan said at a news conference that PKK terrorists should withdraw forces from Turkish territory and disarm. Türk said he prefers truce before any deal to disarm. He said possible truce between the two warring parties would create a positive atmosphere to further explore peace projects. When asked what Öcalan thinks on the first stage of the peace process, Türk said the PKK leader would most likely think the same thing.

He also said he is concerned over Erdoğan’s position, claiming that he is flipping and flopping in his statements.