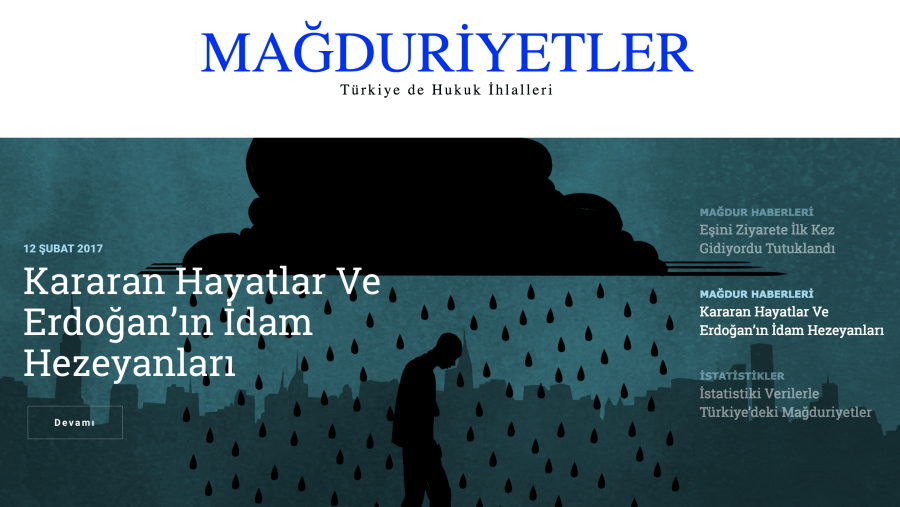 A new website has recently been launched to publish stories or Turkish president Erdogan’s with-hunt, persecution and brutal crack-down on the dissents. The new website is named “Magduriyetler” (Victimization), which aims to disseminate the stories of the countless violations of law after the coup attempt in July 2016.

“Magduriyetler” publishes confirmed news and stories of victims as well as “unsolved murders,” which are mainly highly suspicious deaths in prisons. Its language is Turkish.

A brutal witch-hunt and purge has been carried on against sympathizers of Islamic scholar Fethullah Gulen and other groups -Kurds, Alevis, seculars, etc.- as they reject blindly obeying Erdogan’s one man rule ambition in Turkey.

More than a hundred thousand has been purged after the coup attempt, including thousands of academics, judges and prosecutors, teachers, soldiers… even nurses and midwives with the alleged claim that they were part of the coup attempt.

Hundred of companies were confiscated by the states. Close to 200 media outlets were shut down and the rest has been silenced.

More then 40 thousands people are in the jail that caused separation of families.

Human rights violations, abuse and torture have become ordinary in Turkish prisons according to international reports.

Those who lost their jobs are not able to find any job, even in the private sector; they were thrown out of their rentals by landlords; many were rejected by their immediate families. All have been doomed to starvation by Erdogan regime.

Erdogan’s counsels justify these inhumane treatments to their fellow brothers and sisters in religion, in race and in humanity.