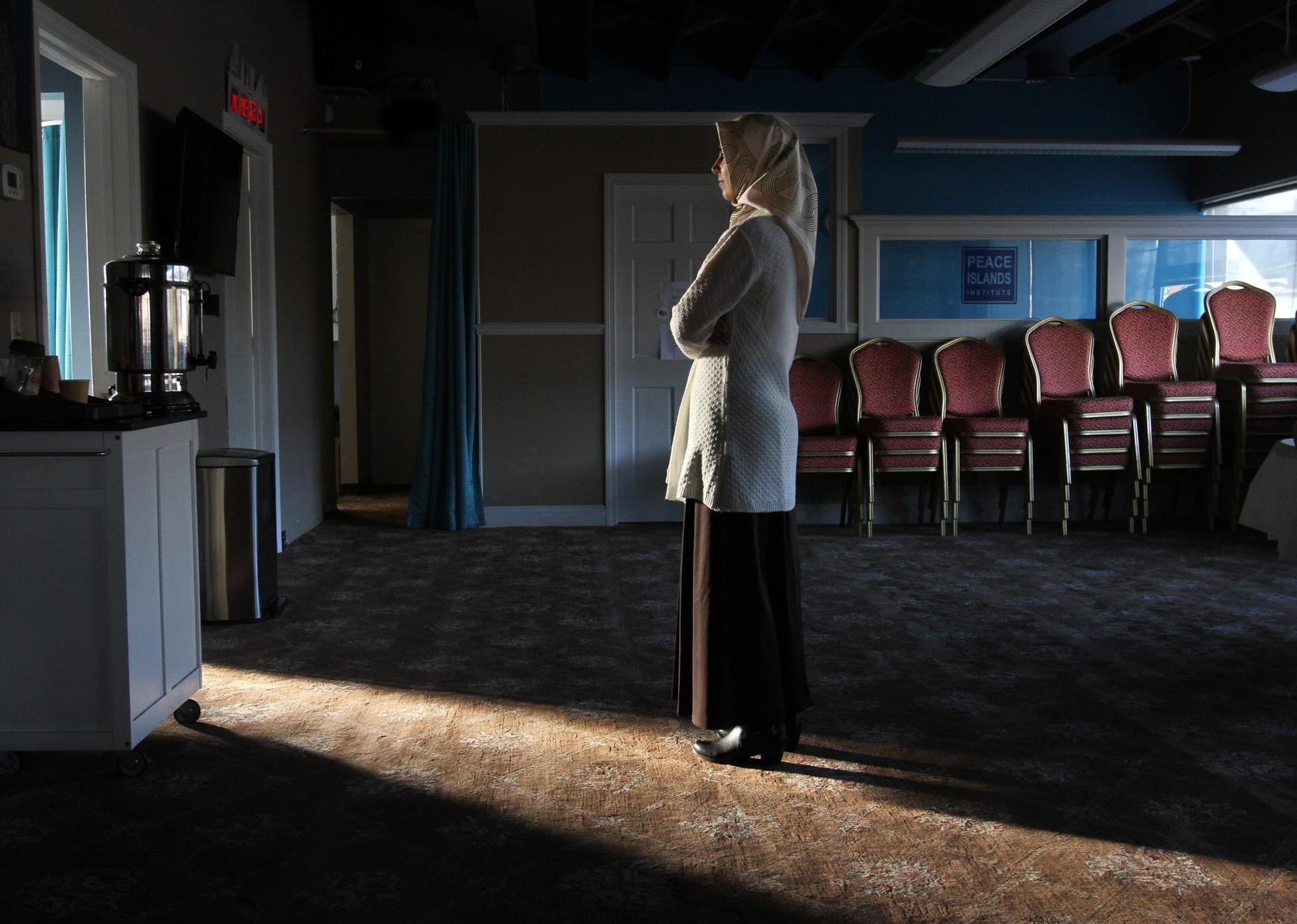 Zeynep, of Providence, was in hiding in Turkey for three months before deciding to flee, making her way to Greece and finally to the United States, to seek asylum. [The Providence Journal / Steve Szydlowski]

PROVIDENCE, R.I. — A new community of Turkish immigrants has taken root in Rhode Island. And its leading members, some of them refugees seeking political asylum in the United States, are spreading a message of tolerance and diversity through their work at Dialogue Foundation, a new organization with a headquarters near Wayland Square.

The organization, according to its mission statement, “believes that sincere dialogue and cooperation among people of different faiths and cultures promote an atmosphere of mutual trust, understanding, respect, and love — a critical challenge in today’s world.”

It is a challenge of particular relevance to Dialogue members as Turkey today is ruled by a brutal dictator and some Americans hold misconceptions about the Islamic faith, says foundation president Sevki Unal, a Barrington resident.

“We are trying to bring people together,” Unal said. “We connect people from different backgrounds, different cultures.” The foundation also provides assistance with housing, employment, education and other services to immigrants and state residents.

According to Unal, about 50 children and adults who left their native country to escape Turkish president Recep Tayyip Erdogan’s regime live in Rhode Island. They are followers of Muslim leader and intellectual Fethullah Gulen, who espouses tolerant Islam and claims millions of followers worldwide. Gulen, once an ally of Erdogan but now sought by him, lives in exile in Pennsylvania.

One recent morning, Unal met in the headquarters of the Dialogue Foundation with two Turkish natives now living in Rhode Island who are seeking political asylum. Because they fear for the safety of relatives still living in Turkey, the woman and the man asked to be identified only by their nicknames, Zeynep and Adam.

Zeynep, 33, a research assistant and scholar, described the Erdogan regime’s targeting of universities and their faculty members, students and staff. Thousands have been arrested and interrogated — along with journalists, judges, prosecutors, government officials and others — following a crackdown that began with a failed military coup in July 2016. Followers of Gulen have been especially persecuted. Many fear for their lives and have gone underground.

“It is terrible,” said Zeynep, who learned English while studying abroad, at a university in New York state. “There is no freedom of speech. There is nothing called freedom, actually. If you have a single conviction about what’s going on, it means you will be next target. People in Turkey right now — some of them hide physically, but many of the others hide their thoughts.”

Zeynep shared with The Providence Journal a seven-page account of the circumstances that forced her to leave Turkey in 2016. The chronicle is part of her application to U.S. Citizenship and Immigration Services for political asylum, she said.

Zeynep was enrolled as a doctoral candidate in a Turkish university when the government began a purge of academicians, the account states; Zeynep was suspended, and shortly after, the police visited her family’s home looking for her. She was not there, but believing she would be arrested, “I hid in an apartment room for two months,” the account states.

“No interaction with people,” she told The Journal. “No going outside.”

Hidden in the trunk of a car, Zeynep said, she was able to escape to Greece and eventually made it to America. She shares an apartment in Providence with three other refugees as her asylum application is processed. A final decision could take years, according to Unal, who has helped others who have applied.

With Unal translating, Adam told of a career in Turkey as a prominent surgeon until he, too, began to fear for his safety. When a neighbor was arrested in 2016, he, his wife and their three young children decided to leave. His sister-in-law, also a doctor, was living in Rhode Island and the family journeyed to the state. They live now in a two-bedroom apartment in Cranston.

While his family’s asylum application is processed, Adam works as a vendor at a mall; in order to practice medicine, he would have to be licensed, but the language barrier and his uncertain status make that an impossibility now, he said.

So would Zeynep, who hopes to use her “voice for people in Turkey.”

And this, she said, is in the spirit of the Gulen movement.

Unal immigrated to America in 2006 from Turkey where he worked for an education company. After living in New York, where he met Zeynap, he moved to Rhode Island in 2015 and worked with the then-state chapter of Peace Islands Institute, which operated in several states. Dialogue Foundation emerged from that chapter. Running it is Unal’s occupation now.

“We are a civic organization which is trying to promote dialogue and relationship with different communities in our district,” Peace Islands Massachusetts vice president Oguzhan Turan wrote to The Journal. “We are a small community in Rhode Island, but in a few years, we have organized great events with new networks to create relationship-building and to improve understanding together. I hope that the Dialogue Foundation will continue the great work for the people in Rhode Island.”