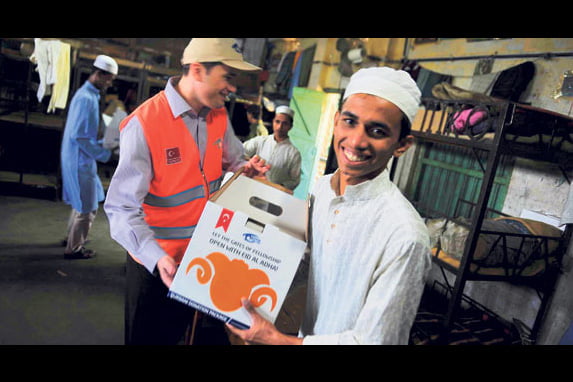 Turkish charities have taken the opportunity to extend a helping hand to those in need both across the country and around the world during Eid al-Adha, an Islamic holiday celebrated by millions around the globe, delivering various relief items, including sacrificial meat, to put a smile on people’s faces during this joyous time.

Eid al-Adha is Arabic for “Feast of the Sacrifice” (Kurban Bayramı in Turkish) and is marked by solidarity and charity between families and friends as well as the less fortunate. During Eid al-Adha, animals are slaughtered as a reminder of the Prophet Abraham’s willingness to sacrifice his son Ishmael to God as an act of obedience and submission. A portion of the meat is then distributed to the poor, along with other charitable donations, as per Islamic tradition.

Aid organizations such as the Türk Diyanet Vakfı, Kimse Yok Mu, Doctors Worldwide and the Deniz Feneri Association sent aid throughout the country and the globe during the holiday. They distributed food, clothing, money and other forms of assistance to the poor in most of Turkey’s 81 provinces and in more than 101 nations around the world.

Kimse Yok Mu delivered 100,000 portions of sacrificial meat in Turkish provinces such as Van, Diyarbakır, Bingöl, Mardin and Şırnak and in 70 countries around the world. The charity slaughtered 12,000 sacrificial animals in Pakistan and delivered their meat to 100,000 families in need. Most of the meat was delivered to families in Punjab affected by constant flooding in the country. Turkish volunteers took part in aid delivery, which also took place in Islamabad, Lahore, Peshawar, Kashmir, Karachi, Quetta and Khairpur.

Kimse Yok Mu Pakistan branch head Özcan İnan said Pakistani authorities had made a list of people in need and flood victims beforehand and that his foundation took sacrificial meat to their doors.

The Paktürk International Education Foundation, which has been based in Pakistan for 18 years, slaughtered 7,000 sacrificial animals in 16 regions of the country and distributed their meat to 25,000 families. Five hundred students — 160 Turkish and 360 Pakistani — took part in the delivery of the meat.

The Cansuyu Aid and Solidarity Association sacrificed 25,000 animals during Eid al-Adha. The association distributed aid packages in Turkey, African and Asian nations, Chechnya, Myanmar, Palestine and several Balkan states, reaching out to 1.5 million people. Cansuyu Bangladesh representative Yunus Emre said that despite obstacles, the foundation had distributed the meat of animals donated to Cansuyu to people in need.

“We were in attendance when the animals were being slaughtered. We also took part in the delivery of the meat. We are very happy about being the first Turkish aid team which entered the refugee camps [in Bangladesh],” he said.

The Turkish Red Crescent (Kızılay) also slaughtered donated animals at the facilities of the state-owned Meat and Fish Institution (EBK) in Sakarya, Adana and Yozgat. The meat of the animals was packaged and will be distributed to people in need throughout the year.

BÜLENT KENEŞ June 14, 2012 For some time, Turkey has been obsessively talking about an alleged contention between the ruling Justice and Development Party (AKP) and the Hizmet movement (aka Gulen Movement). This matter is being discussed in dozens of newspaper columns and TV programs every day. The Hizmet movement’s demands are about principles. These […]