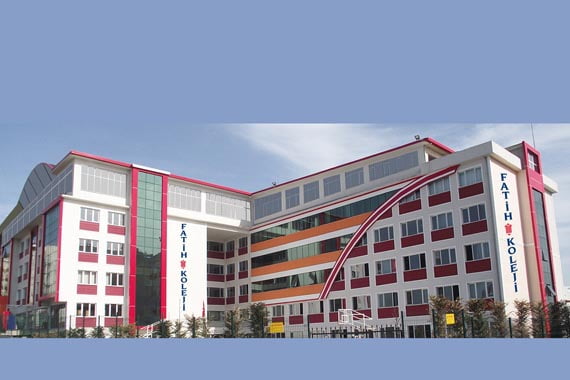 We had a nice surprise last week in the form of an email from a Today’s Zaman reader who had moved to our area in the last year or so. He asked if we would care to come and visit the school where he teaches and whether I would be a judge in an English competition! Well, we don’t get an invitation like that every day, and this particular man had previously impressed us with a series of emails we exchanged several months before. We made the arrangements to join him on Friday, wondering what we’d got ourselves into this time.

The school is located at the extreme end of Gebze and beyond, in the neighboring city of Çayırova, near one of the huge new apartment cities going up everywhere. This one is called Mutlukent, or Happy Place, and while I can’t speak for the development, I can say that the name would apply equally well to the school we were lucky enough to visit. From the moment we alighted from our taxi, we were drawn into what seemed at first to be a fairly new and typical private school but which turned out to be so much more. One of three local schools previously called the Çırağan Schools but now referred to as Fatih Koleji Liseleri since March, 2013, this one is called “Ӧzel Çayırova Fatih Fen ve Anadolu Lisesi.” We had been in contact for several weeks with the (former) Çırağan school in Darıca, and were looking forward to seeing what was going on with this new one in Çayırova.

The first thing we saw put me in an extremely good mood. On an easel in the lobby was a placard, in the middle of which was written: “She’s coming! She’s coming! Elsie Alan, writer for Today’s Zaman,” etc. etc. I had never seen my name on a placard before, much less been announced with such enthusiasm. Our friend Ümit Bey, who had met us at the entrance, took us to the principal, Levent Tekin, who quickly made us feel at home. As it turned out, our friend is Ümit Turan, the head of the school’s English department. We noticed after several minutes of conversation that Tekin’s office door was never closed. Students as well as staff came frequently to his door and stood quietly until he acknowledged them, then stated their business politely, upon which the principal gave his advice with calm authority. We commented on this advanced and friendly form of management, and he proudly told us that he knows each of his students by name.

We found out how new the school really is: it moved here from a previous location in 2012, in the middle of the school year! There is currently a capacity for 500 students, but half of the huge building is still under construction, so the capacity will increase accordingly. The building has four floors of classrooms and laboratories plus a dormitory for out-of-town and international students on the top floor. The school complex includes a preschool, elementary school, middle school and three separate high schools, or lise: one for science (“fen”), one for liberal arts/social sciences (“Anadolu”) and one for vocational medicine (sağlık meslek). All three high schools are for young women only, and it was they who would make their presentations later in the day. The 12 presentations were the result of a previous competition among the classes, and the final awards would be given that day. During our informative chat, we were honored to meet Mustafa Budak, general manager of the three Fatih Koleji schools in the area.

There was still a while until lunch, so I was assigned a lovely young guide, Miss Yasemin Müjgan İleri, who agreed to show me around her school; it was immediately apparent that she loved it wholeheartedly, and she proudly showed her new friend as much as she could.

During our tour I got another glimpse of the forward-thinking management practices of this remarkable education center: on-site day care for teachers’ children. Some European counties do that, but precious few in the US. The babies were crawling determinedly over their spacious domain, while the patient lady in charge watched her little flock explore. After the babies, İleri explained about the school’s uniform (maroon knit shirts and dark blue skirts to the mid-calf), the difference between the lise, the flooring of the gymnasium, where a group of girls were learning the finer points of volley ball (imported from the US), and how the different classrooms had selected their presenters for the day (she wasn’t one, and I was glad because I might have been prejudiced). She finally let drop that one of the three assistant principals was her own father, Murat İleri!

I think it was while she was showing me the preschoolers in PE class that I realized she was not only proud, but totally connected to each of the various functions within her school, as if it were an extension of her family rather than just a place to learn. But learning was primary; of that there was no doubt. She showed me the laboratories and various other function-specific rooms, but for me the highlight of the tour was the smart board she showed me — every class has one, and I won’t bore my more sophisticated readers with how cool it was; I suppose I am the last person on the planet to have finally seen one. Suffice it to say that I really, really liked it; I am pretty old-school when it comes to education, but even I could see the tremendous benefits of such a wonderful tool, especially with the small class sizes I observed — about 16 kids per class, at least in the lise rooms. I only peeked into the elementary classes, but they didn’t look crowded, either.

Eating with the students

Our nice lunch, for which we were very nearly late, was served in the principal’s office for just Lütfü, the principal, Turan and I, and consisted of the same food served to the students and staff in the school cafeteria. (Like other Turkish schools I have seen, the staff eats with the kids, and I think it’s a wonderful practice; when I was at school it was made pretty clear that the teachers really didn’t want to eat with us, but in fact to get away from them, which we took for granted.) We got to meet Turan’s little boy Hasan Phillip, born in Texas and a student at his father’s school.

Finally it was time for the big event, held in a mid-sized auditorium that was being used for the first time. The English teachers — Dilek Ӧztürk, Şeymanur Kilič, and Mehtap Ӧzçelik — were my co-judges, under the watchful eye of Turan. Some of the presentations were by single presenters, and some by teams of two students from the same class. The subject, which proved to be surprisingly interesting, was their own school. Also surprising was the amount of thought that was put into making each presentation a little different from the rest; for 12 five-to-seven-minute presentations on the same topic, they were quite lively and informative.

The judges were asked to score the girls on content, English fluency, presentation, audiovisual usage and time management. One girl used handouts and videos of interviews with fellow students, all used slide-shows, some read from the slides and others just clicked them along and gave their presentation without notes. During the course of the afternoon, Lütfü and I learned a lot more about the Fatih Koleji schools’ fine record (from 2010-2012, eight Fatih students were among the top 14 students in the national university admission tests, including two in first place and four in second and third, out of over 1 million test-takers); how important it was to them that their school provided extra tutoring beyond normal hours; how their garden is bigger than a rival school’s; and how their school is based on a decades-long commitment to academic excellence. They also frequently mentioned their native-English-speaking teacher, Mrs. Gayle, who works with them twice a week.

It was hard to score so many bright young women who were so enthusiastic. Fortunately, there were several judges, so it was definitely not just up to me, which was a good thing: at the end, after nice prizes were presented to the first, second and third-place winners, I thought I recognized a couple of the girls, and it turned out I had known them years ago. It gave me a warm fuzzy feeling to know they had done so well — they were both in the science lise.

One thing I haven’t mentioned is the fact that the school engages with the families of all its students, and that fact was evident in the way the students engaged with their teachers and each other. I have never seen a bunch of adolescent girls with such nice manners, warm self-confidence and eagerness to learn and succeed. Healthy competition, good sportsmanship, the appreciation of their teachers and the opportunity to attend such a special school were all evident from the students with whom I spoke. Lute and I both came away happy and very glad that we had accepted Turan’s invitation. And did I mention that they presented the “famous” writer with a beautiful bouquet? Those folks at Ӧzel Çayırova Fatih Fen ve Anadolu Lisesi really know how to make somebody welcome.

Original title of the article is “[The Outsider] A big day at school.” HizmetNews made slight change in it so that readers around globe my pick the content of the story from the title.