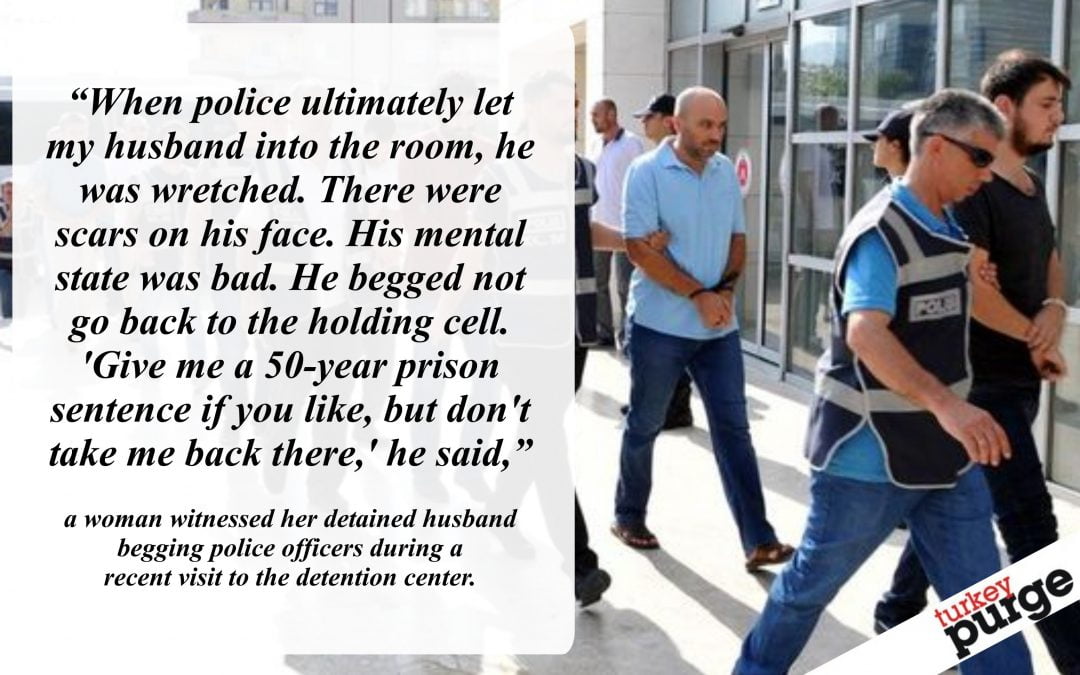 “I am OK with 50 years in prison, but please don’t send me back to detention in a holding cell,” a woman witnessed her detained husband begging police officers during a recent visit to the detention center.

Independent news portal TR724 on Sunday published the third part in a series on the re-emergence of torture in Turkey’s detention centers following a failed coup on July 15, based on the personal accounts of victims and their families.

What follows is a translation of a letter written by a teacher whose husband was detained in the aftermath of a July 15 coup attempt.

“Police raided our home at about midnight on a Thursday in late August. Officers rushed into the house after shouting from outside the door that warrants for the detention of my husband, A.A., and a search [of our house] had been issued. The voices could be heard even from the second floor. We barely managed to take a look at the warrants due to the commotion outside. The warrant was for someone with the initials Ö.I. Police officers said it was only a typing error.

“They were all very loud. I tried to to tell them our little child was sleeping to make them be quiet. I went into our child’s room. When I got back to the living room, after it had grown even louder, I saw that they were shouting at my husband: ‘On your feet!’ They handcuffed my husband behind his back and never let him sit down. They searched the entire house. I opened the window to get some air. They even reacted to this by glaring at me.

“May God curse those who put us in this situation, I prayed. One of them yelled back, ‘You pray to those putschists, pro-FETÖs.’

“While my husband was putting his clothes on, they asked where I worked. I said I am a teacher at a state-run school. ‘All right, we will also be seeing you in two days,’ they said.

“I didn’t hear from my husband for the first four days of his detention. I took some clothes to the detention center on the fourth day. They had me wait in the interrogation room. They asked me questions about my husband. They threatened me by saying: ‘Pro-coup FETÖ members are not allowed to work in state institutions. You will be suspended if we rat on you.’

“When they ultimately let my husband into the room, he was wretched. There were scars on his face. His mental state was bad. He begged not go back to the holding cell. ‘Give me a 50-year prison sentence if you like, but don’t take me back there,’ he said.

The police officers were yelling at me, saying: ‘If you have something to tell us, go ahead and save him!’ My husband was surrounded by four police officers while I was talking with him during the visit, and all were threatening him.

“It was obvious that they let my husband into the room just to show me how miserable he was.