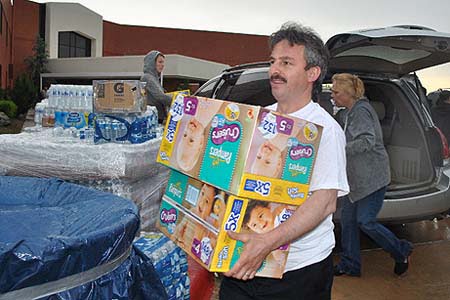 A volunteer working for the Raindrop Foundation carries diapers for the victims of the Oklahoma tornado. (Photo: Orhan Akkurt)

Turkish charity organization Raindrop Helping Hands, a subsidiary of the US-based Raindrop Turkish House, has been helping Americans suffering in the aftermath of a powerful tornado that hit Oklahoma on Monday, leaving 24 dead.

The Turkish charity first provided tornado victims with the most urgent needs such as food, water, gloves, diapers and clothes for babies and blankets.

Orhan Küçükosman, the chairman of the Raindrop Foundation, said the foundation started charity work immediately after the tornado, saying Turks living in the US are deeply saddened by the loss and damage caused by the tornado.

“Our hearts and thoughts go to all of those who were affected by the Tornado but people need more than that,” the foundation stated on its website, calling on people to make donations. Those who want to make donations can go to http://www.raindropturkishhouse.org. Funds collected through the Raindrop Helping Hands’ account will be delivered to the authorized people in the region.

The massive tornado that tore through the Oklahoma City suburb of Moore on Monday wiped out blocks of houses, killed at least 24 people and injured about 240.

The death toll of 24 was lower than initially feared, but nine children were among the dead, including seven who died at Plaza Towers Elementary School, which took a direct hit by the deadliest tornado to strike the United States in two years.