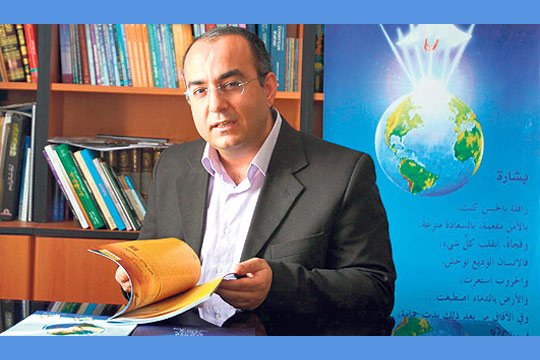 Hira has been bringing together Turkey and the Arab world for six years. Actually, it would be correct to describe it as a platform, rather than a magazine. However, it is not very popular in Turkey, where only 3,000 copies out of the 40,000 printed are sold.

The remaining 37,000 are distributed to intellectuals in the Arab world via subscriptions. The Arab world has been able to connect with Turkey through Hira magazine for the last five years. With a number of workshops in Arab countries, more than 25 symposia and other similar events, Hira magazine has attracted the attendance and participation of more than 2,500 Arab scholars and intellectuals. We spoke with the editor-in-chief of the magazine, Nevzat Savaş, who spends most of his time in the Arab world, before his departure for a meeting.

Hira was launched in October 2005; however, it is fair to say that the foundations of the magazine were laid out well before this date. The magazine’s real story began in 2000, when the Darun Nil publishing house was founded to print Fethullah Gülen’s works in Arabic. In the same year, the publisher participated in a book fair in Egypt, where its stand attracted a great deal of attention. Savaş remembers, “In Egypt, people asked whether we were Muslims — their perception of Turkey was just inaccurate.”

After the book fair, which was quite a success for Darun Nil, the publisher’s representatives visited opinion leaders in Egypt. After establishing a rapport with many of these individuals, Darun Nil representatives invited them to Turkey. The invited figures included Professor Muhammad Imara who, according to Savaş, is among one of the three leading scholars in the Islamic world and is the author of 170 books. Savaş notes that Imara was shocked by the social structure in Turkey; in reference to what he observed in Turkey, Imara said: “We have been wrong for five decades. We must do what Fethullah Gülen has done. We have wasted our energy on conflict and politics. For this reason, upon my return to my country, I will encourage the wise men of my country to go to Turkey; please welcome them here.”

Noting that the Arab world’s perception of Turkey assumes that there are problems in the country with respect to secularism, the military, political parties and the headscarf, Savaş says that they have been organizing visits by Arab delegations since 2002. Subsequently, Farid al-Ansari, Taha Abdurrahman, Şahid al-Bushi and Mustafa bin Hamza, leading Moroccan scholars, expressed that they appreciated the democratic transformation Turkey has undergone. Professor Imara asked for the creation of a medium with which to promote the Turkish experience to be formed with the participation of at least 100 scholars from Syria, Morocco and Algeria as well as other Arab countries. With this demand, the initial steps for the launch of the magazine were taken during the years when Darun Nil representatives frequently met and conversed with Egyptian scholars.

The Arab world is impressed and touched by Fethullah Gülen‘s recommendation that the name of the magazine would be Hira. In regards to the name, Savaş says: “Hira was born strong and mature; every issue features pieces from the Arab world. Every writer is renowned and is popular in his country. We did not have any problems with what to publish.”

Hira, which has helped revive some silent sentiments, maintains a bridge between Turkish and Arab businessmen. The Selahaddin College was launched in Egypt after Hira’s first publication, whilst an Arab businessman, inspired by Hira, donated a vast amount of land for the construction of a school in Aden, Yemen. A substantial amount of investment has been made to build a huge college building and constructive steps have been taken to open five schools through donations by Moroccan philanthropists.

The Hira magazine, acting as a platform for the common mind, dedicates a space for Turkish as well as Arab writers and intellectuals to contribute. By this move, it seeks to serve as a common voice that mobilizes the masses in the Arab world.

In Turkey, Hira appeals to those interested in divinity, religious affairs and the Arabic language.

Turkish readers, who would like to establish ties with Arab academics, receive recommendations from the magazine on which professor can help them regarding their areas of interest. More than 150 Arab students have come to Turkey for educational programs so far. The magazine also tries to reach out to people from different backgrounds via its publications on www.hiramagazine.com.

Initially published as a quarterly, Hira magazine is ready to switch to a monthly print schedule upon intense requests from the Arab world. The number of copies sold by country is as follows: Saudi Arabia — 10,000, Egypt — 7,000, Morocco — 5,000 and Yemen — 4,000. The magazine is finding growing interest in Sudan, Algeria, Jordan, Syria, Lebanon and Mauritania as well. It is further widely followed in Pakistan, Malaysia and Indonesia. The magazine is printed in Turkey, Egypt and Morocco.