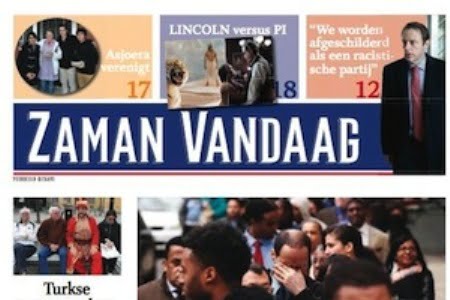 Last week I was able to witness through first-hand experience how difficult it is to explain the Gulen movement outside of Turkey and how easy it is to manipulate public opinion on this issue.

It seems the launch of Zaman Vandaag (Today’s Zaman) in the Netherlands last Tuesday triggered several critics to present their opposition to the paper and, more generally, to the movement it is affiliated with. Let me start with a positive point: Zaman Vandaag is a weekly in Dutch about things happening in the Netherlands and Flanders, the Dutch-speaking part of Belgium. As Mete Öztürk, the editor-in-chief, formulated it, the paper is an indication of the fact that Turks and other migrants who came to Europe 50 years ago as temporary guest workers are there to stay. Zaman Vandaag wants to stimulate its readers to participate in Dutch and Belgian society and aims at fighting stereotypes and prejudices. The paper wants to present a perspective that is often missing in other media, it wants to publish the unknown stories of new and old Europeans living side by side in today’s multicultural societies and it wishes to focus on positive developments that are in danger of remaining unnoticed. As I said at the presentation of the first copy, I sincerely hope the paper manages to reach out to a mixed audience of Dutch and Belgians with different roots through nuanced reports and comments that don’t shy away from the controversies and disputes that are part and parcel of culturally and religiously mixed societies.

Unfortunately, a shadow was cast over the launch of Zaman Vandaag by two incidents. A few days before the paper was presented, a well-known and respected TV program came up with a story about boarding schools in the Netherlands run by Gulen sympathizers. Questions were raised about the functioning of the schools and whether or not these 100 percent Turkish facilities were stimulating the integration of the students into Dutch society — legitimate questions that should be answered. The problem was that they were put in the framework of a one-sided presentation of the Gulen movement as a shady and controversial phenomenon. There were no clear or substantiated accusations, but the feeling you got after watching the program was one of suspicion about the goals of a powerful organization totally unfamiliar to most Dutch. It was the reason why the minister of social affairs who had promised to speak at the launch of the new paper declined at the very last moment. The program also started a new round of debate in the media on the Gulen movement in which some outspoken critics have a relatively easy task: They can come up with wild and trumped-up charges because hardly anybody in the Netherlands knows something about it, and the few that do are incapable of presenting a convincing counter story.

The day of the launch a second incident happened. One of the main newspapers published a big article claiming that the row over Yunus, the foster child of Turkish origin raised by a lesbian couple in the Netherlands, was started by Zaman and other Gulen-related institutions. The story looked weak from the start because it contained several mistakes and tried to connect all actors in this case to the Gulen movement, including a meeting organized by the Directorate of Religious Affairs and a series of programs broadcast by ATV, both without the presumed Gulen links.

Still, the article fueled the already-ongoing debate about the Gulen movement, strengthening the impression among many Dutch that something is fundamentally wrong with this unknown entity. Being on the defensive, many Turks who sympathize with the movement react angrily but make the mistake of lumping all the criticism together. That does not help because there is a huge difference between, on the one hand, biased conspiracy theorists who blame everything they don’t like on the Gulen movement and, on the other, those who, for whatever reason, are simply concerned about certain practices in schools or dormitories linked to the movement. The first should be confronted with the inconsistencies in their unproven speculations. The latter, however, deserves an honest answer based on full transparency.

Joost Lagendijk (born 8 June 1957 in Roosendaal, Netherlands) served as the joint chairman of the Turkey-EU Parliamentarians delegation and now is a Senior Advisor at the Istanbul Policy Center of Sabancı University, Turkey. He is a former Green Left Member of the European Parliament (MEP). More about him…