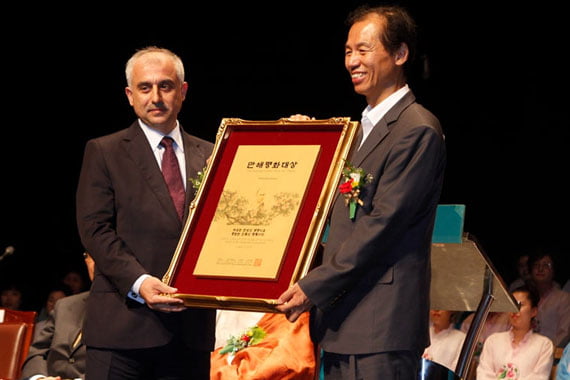 Well-respected Turkish intellectual and scholar Fethullah Gülen has decided to donate the honorarium that accompanies the Manhae Peace Prize he received to Peace Projects, a grant program launched by the Journalists and Writers Foundation (GYV).

Gülen was awarded the Manhae Peace Prize for his contributions to world peace at a ceremony held in South Korea last Sunday. Among the prominent recipients of the Manhae awards since they were first presented in 1997 are former South African President Nelson Mandela, exiled Tibetan spiritual leader the Dalai Lama and Iranian rights advocate Shirin Ebadi.

Peace Projects is a grant program launched by the GYV to support innovative conflict resolution and peace-building projects that focus on preventing, managing and resolving violent conflict and promoting post-conflict peace-building. The Peace Projects program will provide support of up to $50,000 to projects that apply a broad range of disciplines, skills and approaches promoting peaceful coexistence through dialogue and reconciliation, fostering pluralism, good governance, freedom of belief, advancing social and economic development and environmental responsibility, upholding respect for human rights, and gender equality and empowerment.

GYV President Mustafa Yeşil received the prestigious Manhae award and generous $28,000 honorarium in South Korea on behalf of Gülen, who was not able to attend the award ceremony due to health problems.

GYV’s Yeşil, who delivered a speech at the event after receiving Gülen’s award, said the goals and ideals of the Hizmet movement are to help people and to make lives better without expecting anything in return and to work for world peace.

“Mr. Gülen has emphasized that he is accepting this award not for himself but on behalf of the volunteers who work for humanity and peace. I find it meaningful that this award, named after Manhae, who sought to become an ideal person and who made big sacrifices for his homeland, is being given to Mr. Gülen,” Yeşil said.

Gülen decided to donate the honorarium to Peace Projects. The Peace Projects grant program will deliver its first awards in March of next year and individuals and institutions proposing projects that promote peace and conflict resolution are encouraged to apply. Additional information about the program can be found at peaceprojects.net.

Gülen is a Turkish Islamic scholar well known for his teachings promoting mutual understanding and tolerance between cultures. Now residing in the US, he has pioneered educational activities in a number of countries, along with efforts to promote intercultural and interfaith activities around the world. He has written nearly 50 books in Turkish, some of which have been translated into several languages.