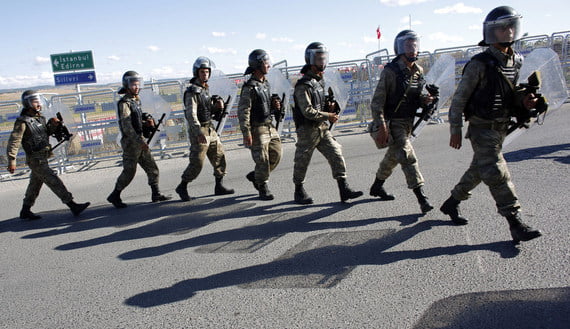 Could the graft investigations that, since Dec. 17, have all but overwhelmed Turkey’s political-legal system and have led to resignations of three cabinet ministers change the power balance in the country and push Turkey back to its factory settings? Or, to speak bluntly, will the political earthquake we are living through nowadays bring back the days of the “military tutelage”? Could Turkey wake up to yet another military coup?

Defensive tactics the government has deployed to downplay the corruption investigations seem to have prompted unexpected reactions from the military. The government, in its response, has counterattacked the police and the prosecutors carrying out the investigations. Accordingly, the objective of those police and prosecutors affiliated with the Islamic faith community of the Gulen movement is to topple the government. This “police-judiciary” gang — a title pro-government media came up with — is charged with developing false evidence to bring down the government. No wonder there are a dazzling variety of conspiracy theories being circulated nowadays, with pro-government quarters claiming that the operations are the brainchild of some power centers of the United States, Israel and Europe and their Gulen movement extensions inside the state of Turkey.

It appears that to garner support for its counterattacks the government is now trying to get its once-ferocious foe, the military, on its side. “False evidence” charges were earlier on the agenda of the Ergenekon and Sledgehammer cases — trials concerning military coup plots. The defendants in those cases had claimed that a “gang” within the police was manufacturing evidence. Amazingly, the grievances of the Ergenekon and Sledgehammer trials are now supported by pro-government quarters.

A Pandora’s box was opened by Yalcin Akdogan, a leading adviser of Prime Minister Recep Tayyip Erdogan, in his daily Star column of Dec. 24, 2013. In this article, Akdogan alluded to Gulen’s extensions within the police-judiciary, saying, “Those who are engineering intrigues against the army of their country, against its national intelligence, its national bank and the civil authority that is embraced by the people cannot be serving the interests of this country.” Turkey’s chief of General Staff responded immediately and, quoting remarks Yalcin Akdogan made on Dec. 27, informed the prosecutor-general that a crime has been committed and asked for legal action against those who have been “targeting the Turkish Armed Forces [TSK] and its personnel.’’

The chief of General Staff not only lodged a legal complaint but also came out with series of press declarations. The TSK, which had become all but invisible in the political arena, suddenly appeared to have made a comeback.

It is early yet to analyze the implications of this “return.” But the sudden re-emergence of an institution that for many years acted as the center of tutelage over politics of the country into public life, after it was finally dislodged by a tough struggle, has naturally created concerns.

The first important warning came from veteran journalist Hasan Cemal. Cemal, in his strongly worded article against Erdogan, wrote, “you are playing such a nasty game. If it goes on like this, because of you and your not-so-bright advisers the military will return back to politics. Aren’t you aware of the indicators of this possibility?”

After Hasan Cemal came Murat Belge, one of leading intellectuals of the country, who warned that the political tension and strife in the country could trigger another military coup. According to Belge, although the army appears to have withdrawn from the political arena, there haven’t been any real changes in its “traditions.” Belge says the latest developments in Turkey could activate some junta groups within the military:

“I am sure that whether it is a major or a colonel, there are officers who are saying, ‘Something must be done to get rid of this government before they destroy the country.’ Certainly among them there will be those who will say ‘OK, you and I, we must do something.’ I am not saying this because I know something. Mine is a sociological assessment that asks how much you can truly cleanse an institution in a couple of days. After the May 27 [1960] coup our military had acted within the military hierarchy, but that coup was against the hierarchy. There can now be a return to May 27. You can’t simply dismiss it that possibility. There are perilous similarities. Erdogan must not make the mistake of thinking that he controls the entire army.”

Those who are not intimate with this country’s history may have problems grasping what Murat Belge is trying to say: The AKP, which has good relations with the upper echelons of the military and who has a certain degree of control over them, may be caught off guard by a coup attempt originating from the lower echelons of the military. As an example, Belge is citing the May 27, 1960, military coup that was staged by 37 officers at the lower ranks of major and colonel and that culminated in the executions of the prime minister and some ministers of the era.

Many other writers apart from Belge are also expressing fears of a “military coup.” One of the more interesting analyses was by Okay Gonensin of daily Vatan. He too alludes to the 1960 coup and draws attention to the similarities of the political climate today with pre-1960 days. Gonensin says, “In terms of societal polarization there are truly striking similarities between the atmosphere of pre-May 27, 1960, and today. It just doesn’t sound reasonable to go back to the days when the Democrats and Republicans had separate coffee houses in every neighborhood and people were treating each other as enemies.”

There are even pro-government journalists pointing to the signs of the military returning to the political arena. Hakan Albayrak of daily Star was one of them: “The chief of staff, after a long respite, is again making statements. They sound harmless but are nevertheless disturbing. For the military to once again resume the habit of issuing statements will cast the shadow of old Turkey on our new Turkey. As the atmosphere changes, the nature of these statements can also change and we can find ourselves once again debating memorandums. The military’s appeal to the public must be categorically rejected. If there is going to be a statement about the military, it should be made by the prime minister or minister of defense.”

This is how Albayrak expresses his fears of a military coup:

“One more thing. Armored units should be moved out of our capital. No matter how much of a New Turkey we are talking about, some forces of Old Turkey continue to pose a potential threat against national will.’’