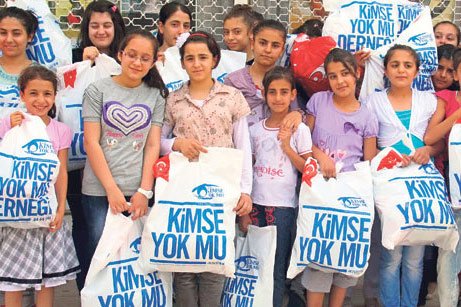 Turkish humanitarian aid organization Kimse Yok Mu (Is Anybody There) has delivered gifts to 8,000 children from poor families in the province of Diyarbakır to help them enjoy Eid al-Fitr, the three-day religious festival that marks the end of the holy month of Ramadan.

It is a tradition to buy new clothes or shoes before the religious festivals of Eid al-Fitr and Eid al-Adha (Feast of the Sacrifice). Kimse Yok Mu has delivered new clothes and shoes to poor families that cannot afford to buy these items for their children for Eid al-Fitr in Diyarbakır. Kimse Yok Mu has given gifts to children and parents alike. In addition to the clothing, the charity has also distributed food to families in need in the same province.

Through the charity’s aid campaigns carried out for those in need in the region over previous years, Tanış stated that they know by heart which streets and neighborhoods need the most help in the province.

Meanwhile, Kimse Yok Mu, the Kral FM radio station and Kral TV have conducted a joint project in which they organized 29 iftar dinners in 29 provinces around the country during the month of Ramadan. The iftar dinners were broadcast live on Kral TV and Kral FM in a program titled “Paylaşma Sevinci” (The Joy of Sharing).