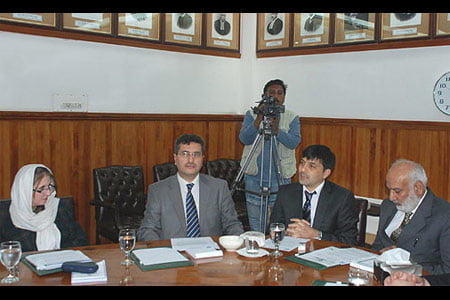 A press conference was held at the at the University of the Punjab in Lahore on Monday, to inform reporters about upcoming conference on Gülen's thoughts. (Photo: Today's Zaman)

A conference titled “Ideal Human & Ideal Society in the Thoughts of M. Fethullah Gülen,” seeking to extensively discuss the various dimensions of the Turkish Islamic scholar’s perspectives over an ideal society in a tumultuous time, will kick off on Tuesday in Lahore, Pakistan.

In a press conference held at the University of the Punjab in Lahore on Monday, Professor Dr. Liaqat Ali, the acting vice chancellor; Assistant Professor Maria Maldonado, director of International Linkages; Harun Köken, chairman of the Rumi Forum; and Hakan Yeşilova, editor-in-chief of The Fountain Magazine, disclosed the details of the conference.

Professor Ali told reporters that the University of the Punjab had conferred an honorary doctorate on Gülen on May 17, 2012, in recognition of his contributions to education and peace, and that this conference will be a follow-up event.

Dedicated to exploring Gülen’s ideas on diverse issues, the conference will feature speakers and participants from a number of countries, including Australia, Indonesia, Singapore, Turkey, the United Kingdom and the US.

Gülen is a key figure in Turkey and abroad. He is known as the founder of the Hizmet movement, which has played a significant role in the opening of more than 500 schools in over 100 countries around the globe. Additionally, several linked organizations and institutions have stepped up their efforts to build interfaith dialogue through cultural centers and intellectual circles in a bid to contribute to peace and reduce tensions.

Gülen has been living in the US for more than a decade.