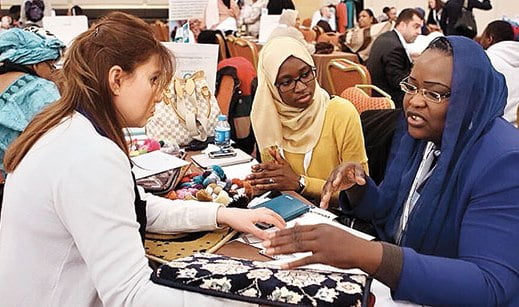 Wall Street Journal (WSJ) Turkey quoted Meral as saying on Friday that “different government figures, including Prime Minister Recep Tayyip Erdoğan, warned [that it would] do away with TUSKON unless it cut relations with certain groups critical of the government.” Meral was speaking in an interview with the WSJ Turkey on the sidelines of a Turkey-Africa Business and Investment Council meeting in İstanbul.

Meral’s comments are no surprise to those familiar with Erdoğan’s efforts to clamp down on his critics. Continuing government pressure and an alleged smear campaign against Turkey’s largest Islamic group, the Hizmet movement, which TUSKON is affiliated with, has seen leading business figures receive threats from government and its supporters. Erdoğan alleges that the Hizmet movement is working to undermine his political power, but he has provided no sound evidence to prove his claim. The Hizmet movement has so far dismissed all claims fabricated by the pro-government media and used by Erdoğan as “baseless.”

“Companies close to the Hizmet movement were contacted by some top government figures — by Erdoğan in person in certain cases — and they received threats to cut relations with the movement. Key figures from the National Intelligence Organization [MİT], the Finance Ministry and even business confederations like us visited TUSKON member companies to give them a warning,” Meral told the WSJ Turkey. The paper said the Ministry of Finance denied the claims and that the ruling Justice and Development Party (AK Party) was not immediately available to comment on the issue.

“Yes, we are under intense political pressure; however, TUSKON members are not afraid of these threats. Instead, they have doubled efforts to boost new investment and charity projects,” Meral said. The chairman said they have faith that the current oppression will eventually come to a halt and leading business confederations like TUSKON and the Turkish Industrialists and Businessmen’s Association (TÜSİAD) will survive to serve Turkey. “Political figures and the government are temporary, but such organizations as TUSKON will continue to serve the Turkish people for a long time,” Meral concluded.

A harsh critic of the government’s arbitrary changes to the law, TÜSİAD has repeatedly warned that Turkey is at risk of losing foreign investments as long as there is no respect for the rule of law, legal codes conflict with European Union rules, public procurement laws keep being amended and companies are pressured through tax fines.

In a fresh attempt to deepen mutual trade and investment ties with flourishing African markets, TUSKON inked a critical agreement with African market representatives on Friday in İstanbul.

TUSKON brought African and Turkish businesswomen together at a business and investment summit on Friday in İstanbul where a deal to announce the establishment of “Turkey-Africa Business and Investment Council,” a new initiative to help boost trade and investment projects between the two markets, was signed. A total of 350 businesswomen from 39 different African countries and 450 Turkish female business owners participated in Friday’s Turkey-Africa Woman Entrepreneurs Trade Bridge summit in İstanbul.

“We believe Africa is the world’s future with its fertile land, 1 billion active population and promising business opportunities. … Turkey’s mutual trade volume with the African continent is currently $20 billion and we are doing our best to boost this figure,” Meral said at Friday’s summit. The women entrepreneurs’ summit is of critical importance, representing the dynamic female business-owner potential in Africa and Turkey alike, TUSKON Deputy Chairwoman Rana Tezcan Açıkgöz said at the summit on Friday. “The role of women market players in cementing Turkish-African ties will gain even more importance in the years to follow,” she further said.

Erastus J.O. Mwencha, deputy chairperson of the African Union Commission, said at Friday’s summit that Turkey already has big potential among Africa’s trade partners. “The mutual trade volume between Turkey and Africa jumped from $4 billion 10 years ago to $20 billion last year. We have a number of promising sectors that will lead to further improvement in trade ties here,” he said.

Among the promising sectors Mwencha referred to, textiles, food, mining and construction are the leading fields of investment and trade between Turkey and Africa. TUSKON has been promoting the improvement of Turkey’s trade ties with Africa and has already conducted a series of meetings to boost commercial relations with African countries. It is thanks to these efforts that Turkish firms have enjoyed considerable success in Africa.

A rapprochement between Turkey and African nations over the past decade has contributed to this process.

Mwencha stressed that female entrepreneurs have enhanced their influence in African markets, adding that women now occupy more seats in critical political and trade-related private and public institutions on the continent. “The total value of infrastructure investments that needs to be made in Africa equals $93 billion per year. The middle-income class is growing faster than ever before and there are countless opportunities here for Turkish investors,” he said.